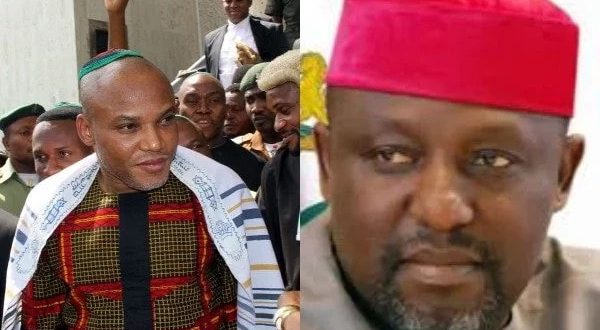 Imo state governor, Rochas Okorocha, says the leader of the Indigenous People of Biafra IPOB, Nnamdi Kanu, and his members are deceiving Igbos with their call for a separation from Nigeria.

According to a statement issued by his chief press secretary, Sam Onwuemedo yesterday, the governor stated this while handing over Staff of Office and certificates of recognition to sixteen traditional rulers in the state. Okorocha said he is worried that traditional leaders in the South East and clergymen have not come out to speak against the recent calls for separation by IPOB members.

“On IPOB, the cloud is gathering storm, nobody is talking even our traditional rulers, Pastors and leaders, this is bad for our people. If you will remember vividly that a few years ago, during the Civil War, it was a similar story. That was how it all started. At that time, we believed that the Ohafia warriors will be able to fight and disseminate the North. Now we are been deceived that IPOB will drive away Nigeria and give us Biafra. Even our Pastors, men of God and some leaders in the rural areas, nobody is speaking out against this action and the song of war is coming gradually like a desert encroachment. We fought the war and it was believed that the Igbos will learn from it but they still went ahead and developing the resources of other regions. There are 5 million Igbo living outside the shores of Igbo region. Any form of war will cause the Igbo over 3 trillion naira loss in properties and assets. No sane person will spread the message of division and war because it does not benefit the Igbo in any way. I urge you, traditional rulers, to speak against it and educate your people on the true state of things. Igbo need to build bridge of unity across the nation.” he said

Previous North Korean Leader Kim Jong-Un Suspends Plans To Launch Missile Attack On US For Now
Next ‘Chelsea Has Treated Me Like A Criminal, If He Wants To Fine Me, Let Him Go Ahead!’- Diego Costa