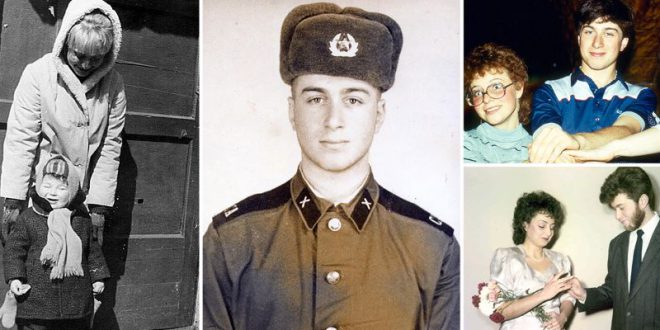 He is known for his billions and his lavish lifestyle, but Chelsea owner Roman Abramovich’s life started out in the worst possible way imaginable.

Before he turned three, he had lost both parents – his mum to blood poisoning when he was just one and his dad through an accident on a construction site.

Raised by relatives, young Roman dropped out of two colleges and, instead, earned his money from selling plastic dolls on a market stall.

An entrepreneurial spirit combined with powerful connections saw him become one of the world’s richest men before he turned 40.

As the 55-year-old Russian puts his football club up for sale for a reported £3bn after nearly 20 years of ownership, we take a look at the beginnings of the Roman empire.

His mum, Irina, fell pregnant again less than a year after having Roman before suffering fatal blood poisoning. She died aged 28.

Both his parents were Jewish and had met while working at the national economic council.

After his mother’s death, Roman was sent to live with his paternal grandmother, Tatyana, so his father, Arkady, could throw himself into work.

Tatyana and her husband Nachman were Belarusian Jews who had lived in Lithuania and were deported when it was annexed to the Soviet Union. She and Nachman were separated and he died in an internment camp.

In May 1969, Arkady volunteered to supervise construction work and as a crane was moved into position, the arm broke off and crushed Arkady’s legs. He died a few days later.

Afterwards, Roman was sent to live with his uncle, Leib, his wife Ludmilla and their two daughters in their small flat in Ukhta, 200 miles from Moscow.

Leib and Ludmilla slept on the sofa in the living room so Roman could have their bed. The family later moved to the capital.

Despite his tragic losses, Roman didn’t feel his childhood was particularly bad.

He once said: “In your childhood, you can’t compare things: one eats carrots, one eats candy, both taste good. As a child you cannot tell the difference.”

Roman’s maternal grandparents, Vasily and Faina, were from Ukraine, where Russia’s President Vladimir Putin is currently waging his bloody war.

They fled during World War II, when Roman’s mum, Irina, was three.

Details of Roman’s youth – indeed life – remain a much of a mystery.

He is said to have dropped out of two universities, later admitting: “I never insisted that I was a good student.”

His first money-spinning bid was selling dolls from a stall in a Moscow market in the late Eighties.

According to the biography Roman Abramovich: The Billionaire from Nowhere, written in 2015, he still employs the woman who began working for him back then.

He also sold rubber ducks from his Moscow flat and after his first wife Olga’s parents gave him 2,000 roubles as a wedding present in 1987, he expanded his range to deodorants and perfumes.

The dismantling of the Soviet Union and Mikhail Gorbachev’s perestroika – meaning restructuring – allowed oligarchs to buy up state-owned businesses and changed the course of Roman’s life.

For Roman, this was the chance to make serious money.

In 1992, he was arrested for allegedly using fake documents to buy 55 tankers of diesel but the charges were dropped.

Roman said in 2011: “I have never falsified any documents. None of the people close to me has ever faked a document.

“If backdating documents is something that is not very ethical, then perhaps we could be accused of that.”

It was when he joined up with the late oligarch Boris Berezovsky, who had made his money by importing Mercedes cars, that Roman’s opportunities opened up.

Together, they bought Sibneft oil company for £100m – a sixth of what it was said to be worth – using a controversial loans-for-shares programme.

The connection not only provided Roman with key access but also a flat in the heart of government, at the Kremlin.

Later both Roman and Berezovksy helped propel Putin into power, with Roman reportedly being one of the first to suggest Yeltsin appoint Putin as his successor.

In 2012, Roman won a high court case against Berezovsky over a disputed £3bn debt which involved allegations of blackmail, breach of trust and breach of contract.

After a brief spell serving in the Russian army, Roman married his first wife, Olga, at 21. The pair divorced three years later.

He has seven children with two other ex-wives, Irina and Dasha.

The majority of Roman’s wealth comes from being the largest shareholder of Evraz, a steel and mining giant listed on the London stock market.

Roman first became known to the Russian public in 1998 when he had already made billions, but despite the interest, no newspaper had a picture of him.

According to a biography by Dominic Midgley and Chris Hutchins, one publication offered a one million rouble reward for anyone who could produce a photo of what they describe as the “reclusive powerbroker.

It produced one blurry image which was used for months in the press until Roman’s advisers persuaded him to pose for official shots.

He is the eighth richest man in the world, according to the most recent Sunday Times rich list, with a staggering £12bn fortune.

Described as “very quiet” and “shy” by friends, he is said to be almost tee-total, enjoying only the occasional glass of red wine.

In his downtime, as well as holidaying on his superyachts and in his homes in France, the USA and the Caribbean, Roman enjoys fishing, ten-pin bowling and football of course.

In an interview with The Observer in 2006, at Roman’s Red Square boardroom office, the reporter noted there was a “small picture of Putin.”

As well as connections in Russia, he is friends with the Marquess of Reading and banking millionaire Lord Rothschild.

He once loaned Prince Charles his helicopter to fly to a polo tournament at the organiser’s request.

In 1999, having never stepped foot in the far eastern Siberian territory of Chukotka, near the Arctic circle, Roman stood for governor – and won with nearly 100 cent of the votes.

His biographers describe it as a “ruthless but bloodless coup”.

They go on to claim: “Grateful eskimos in Chukotka revere him as a messiah; hard-bitten number-crunchers in Moscow brand him a shameless, albeit legal, tax avoider.

“Junior staff admire his loyalty and charm; Siberian oil workers talk bitterly about their slashed wages and they way they were talked into selling their shares in his oil company.”

In 2006, it was estimated Roman had pumped around £770m into the region, building 18 schools and renovating a further 18, as well as 28 new hospitals.

The cash injection brought the life expectancy and birth rate up and halved infant mortality.

“None of these is real. When you come out and you see a situation and there are 50,000 people, you want to do something.”