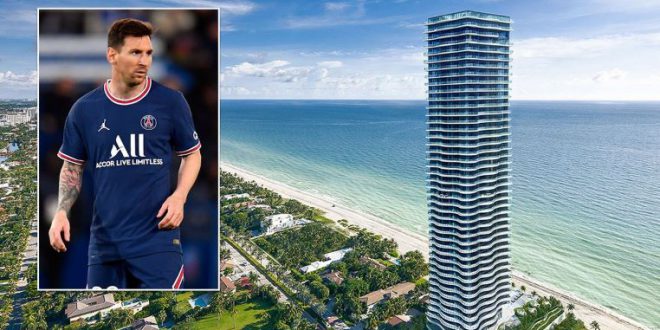 Having dominated world football for much of the past two decades, Lionel Messi is already trying his hand at the game of real estate.

The 34-year-old has put his luxurious Miami penthouse up for sale for a cool asking price of £5.7million, despite only purchasing the condo seven months ago when he was still a Barcelona player.

That could be bad news for supporters of David Beckham’sMajor League Soccer franchise, Inter Miami, who are hoping Messi heads to Florida for a swan song before retiring.

However, the six-time Ballon d’Or winner still owns a property down the road, in the downtown Porsche Design Tower, which he purchased in 2019.

Messi has put his £5.7m penthouse up for sale ( Image: REGALIA MIAMI CONDOS)

Messi’s other penthouse is back on the market, though, after the Paris Saint-Germain superstar opted to put it up for sale, according to AS.

Located in Sunny Isles Beach, Florida, the condo has an ocean view and is situated roughly 10 miles away from the famous Miami Beach.

The Barca legend even has his own brand of wine, a premium Malbec which is aptly named L10.

Whoever takes up the property will be able to enjoy an outdoor swimming pool, looking out onto the Atlantic Ocean.

Nevertheless, they could still end up living in the same city as Messi, whom Beckham is keen to bring stateside.

Mirror Footballexclusively revealed in August that Beckham had already held talks with the club regarding a move.

There the Argentina captain would link up with compatriot Gonzalo Higuain, who told ESPN in September: “I don’t want to get in trouble, I don’t know about Leo in Miami.

“He signed for two years with PSG… The club wants it, we’ll see.”

Reports have also indicated that club president Beckham will try to lure Messi to Florida by signing his good friend and ex-Barcelona team-mate, Luis Suarez.

Co-owner Jorge Mas has discussed the possibility of signing the forward up, revealing he is “optimistic” that “arguably the best player of all-time” will don Inter’s black and pink shirt one day.

“I think it will complete the legacy of the greatest player in our generation and will meet with the ambitions of the owners of Inter Miami to build a world-class team,” Mas said in an interview with the Miami Herald.

“David and I have been working really hard, we have aspirations of bringing the best players here and Messi is a generational player, arguably the best player of all time.”

A spanner in the works is that Messi has previously laid out plans to represent beloved Argentine outfit Newell’s Old Boys before retirement, although that was when he also claimed that he would never play for another European side.

Beckham, who gave the MLS an unprecedented boost in 2007 when he signed for LA Galaxy, reportedly hopes to have the superstar in Miami by 2023.

For now, Messi is contracted to PSG, the club which the former Manchester United midfielder emotionally hung up his boots at in 2013.

Now in the boardroom rather than on the pitch, Beckham’s job is to convince players to join his project, currently managed by ex-United team-mate Phil Neville.

However, the heat is on Neville after just two wins from Inter’s last 10 games which has seen them fail to make the play-offs this season.

Messi is contracted to PSG until 2023 ( Image: Getty Images)

But it seems Beckham’s role in recruitment is an easier one than being the boss, telling ESPN: “To be honest it’s not a difficult pitch, you just say Miami and they are like “okay!”

“When I chose Miami, there were a couple of reasons. It’s a great city, we have got a great fanbase but I also understand there is great talent in Miami and south Florida and I think we have a real opportunity.

“Miami as a city has that pull on players that have been playing in Europe and that are big stars and we have proved that already with Blaise [Matuidi] and Gonzalo.

“There was always going to be those discussions. But I actually don’t think it is a tough one for players to decide to be honest because it’s a great place.”

Judging by Messi’s properties, Beckham is spot on.