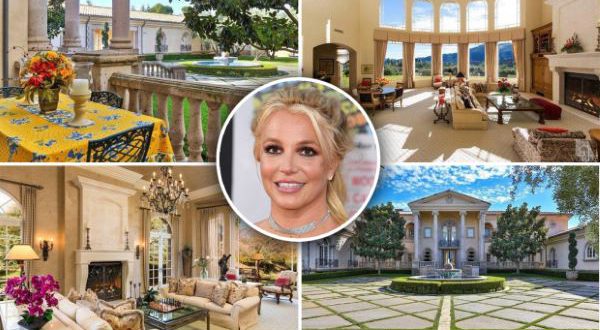 Inside Britney Spears’ $7.4M LA mansion where she dances, poses topless & hunkers down in fight to end conservatorship

Inside Britney Spears’ $7.4million LA mansion, she danced, posed topless, and hunkered down during her fight to end her conservatorship.

When Britney, 39. shared an Instagram video of herself dancing in a crop top and shorts, she had made the sexy clip from the living room of her California home.

According to the New York Post, the Thousand Oaks home has about five bedrooms, eight bathrooms, and a pool house with a full kitchen.

The 13,264 square feet of the property came with enough space for an elevator, a large media and game room, and a 500-bottle temperature-controlled wine cellar.

The massive 21 acres of Los Angeles property included manicured parks, a tennis court, and a golf course with sand traps.

The Italian villa-inspired estate is protected by two private gates to provide privacy and security.

With panoramic valley and mountain views, you can see why Britney – who has been dating boyfriend Sam Asghari – has supposedly hunkered down here in this mansion since the start of the pandemic.

Earlier this August, documents were filed by her father Jamie Spears’ lawyer, which stated that he will be stepping down as his daughter’s conservator.

‘SOME TYPE OF THEFT’

Recently, Page Six reported that the pop star had called 911 before 6 pm to report a mysterious theft at her LA home on August 10th.

Captain Eric Buschow, the department’s media relations officer, told the site: “She called and wanted to report some type of theft,”

“When deputies arrived and contacted her security staff, they informed the deputies that Ms. Spears decided she did not want to file a report at that time. And so, deputies left.”

He added: “There was no law enforcement action at that time, no report taken or anything like that.”

Because the singer decided not to pursue action, there was no official record about what was allegedly stolen from her house or if there are any suspects.

About six days later, police returned to the singer’s property after a female staff member filed a report against her.

Britney allegedly slapped the housekeeper’s phone away from her grasp after taking one of her dogs to the vet.

The female staffer reportedly told the cops that she took one of the singer’s dogs to get checked out.

The housekeeper claimed that she was not happy with how the pet was being treated.

Upon returning, she and Britney allegedly got into a disagreement about the pup’s health, which led to the housekeeper’s phone being knocked right out of her hand.

The woman filed a report at the Sheriff’s station after the alleged incident – which officials said will be handed over to the District Attorney’s office “probably on Friday.”

Britney and her team have reportedly denied the claims made against her and claimed the housekeeper was allegedly “making it all up.”

A source close to the entertainer also told The Sun that she “didn’t hit anybody.”

An insider claimed: ”Britney did not hit her housekeeper, she didn’t hit anybody. She had no physical contact with anyone in her household.

“There was an argument on Monday over one of Britney’s dogs which led to cops being called but there were no injuries, not even a scratch.

“Cops being called was an exaggerated reaction to the situation.”

Ventura Sheriff officials confirmed that there were “no physical injuries” with any parties involved.

Charles Igbinidu is a Public Relations practitioner in Lagos, Nigeria
@https://twitter.com/ionigeria
Previous Afghanistan: Woman gives birth on US evacuation plane
Next BOOTYLICIOUS Beyonce shows off her peachy behind in a pair of very revealing denim chaps