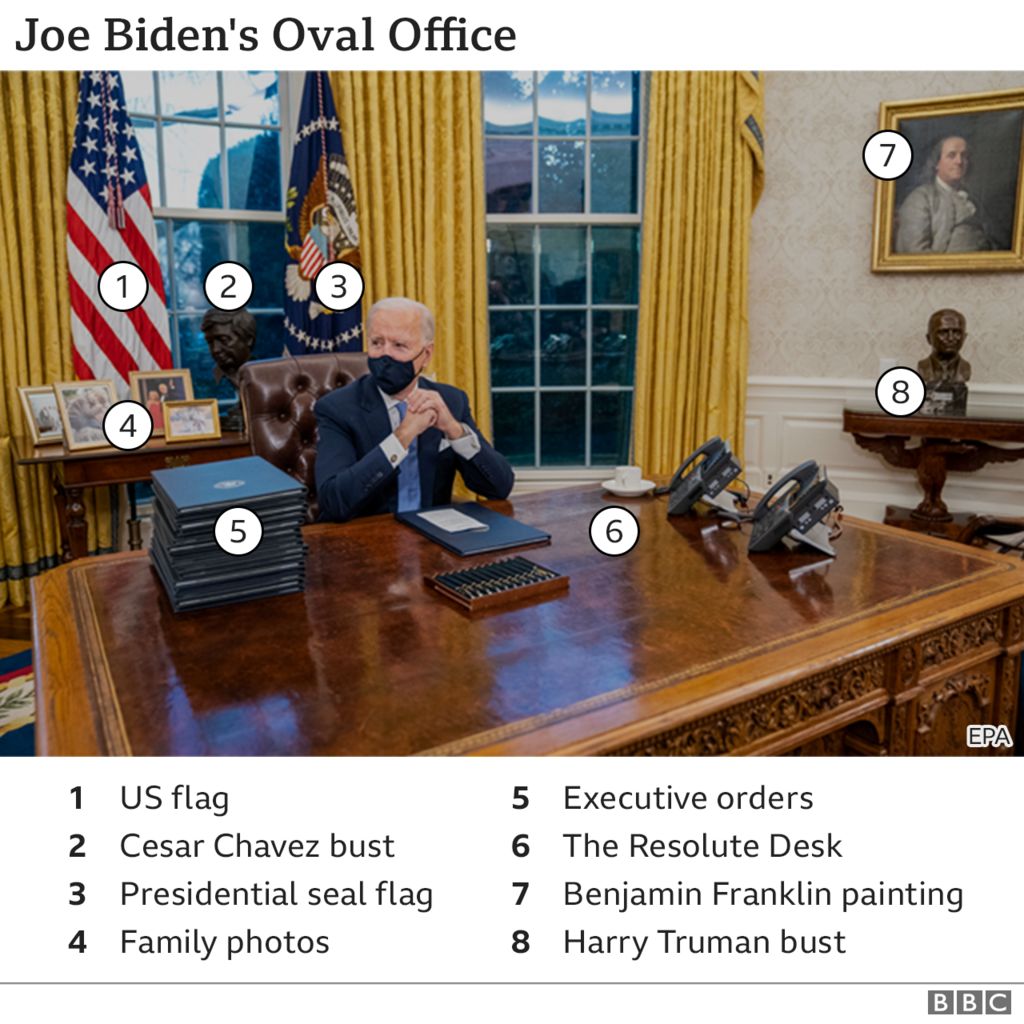 Incoming presidents bring their own personal touch to the Oval Office and much is being read into the way Joe Biden has chosen to decorate his new place of work.

The room has been filled with portraits and busts of some of the most iconic and influential leaders of American history.

“It was important for President Biden to walk into an Oval that looked like America and started to show the landscape of who he is going to be as president,” Ashley Williams, the deputy director of Oval Office operations, told The Washington Post during an exclusive tour.

Gone is the portrait of Andrew Jackson, the 7th president and a populist with whom President Trump frequently identified and who also faced censure although he was never impeached.

His portrait, to the left of the seat of the Resolute Desk, has been replaced with one of Benjamin Franklin, a founding father who was also a leading writer, scientist and philosopher. The Post said Franklin’s portrait was intended to represent President Biden’s interest in following science as he attempts to tackle the coronavirus pandemic. 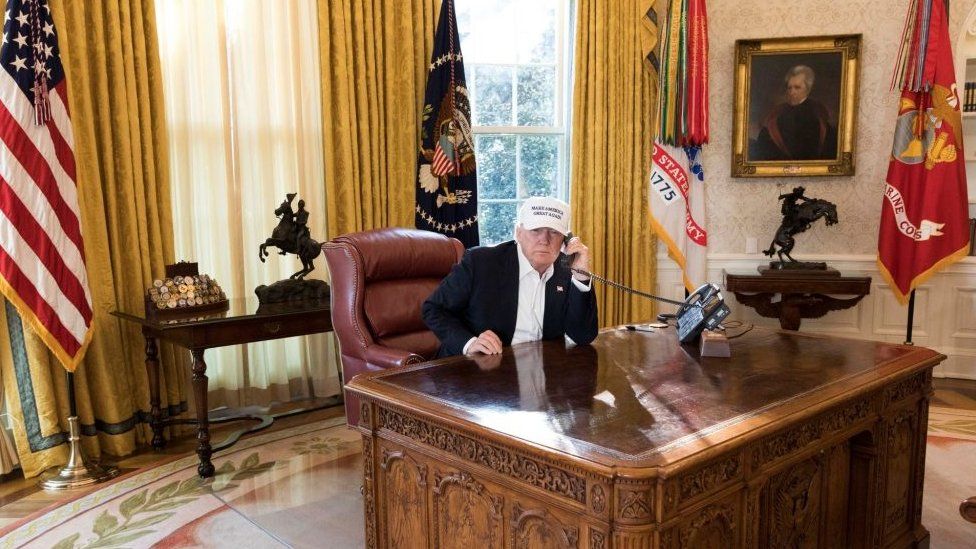 The portrait of Andrew Jackson, seen here behind Donald Trump’s desk, has gone

From his desk, Mr Biden will look up to see, flanking the fireplace, busts of Rev Martin Luther King Jnr and Robert F Kennedy – two men whose impact on the civil rights movement Biden is said to have frequently referenced.

Other busts around the room include another key figure in the civil rights movement, Rosa Parks. There is also an Allan Houser sculpture depicting a horse and Chiricahua Apache rider once belonging to the Hawaii Democrat Senator Daniel Inouye, the Post reports. 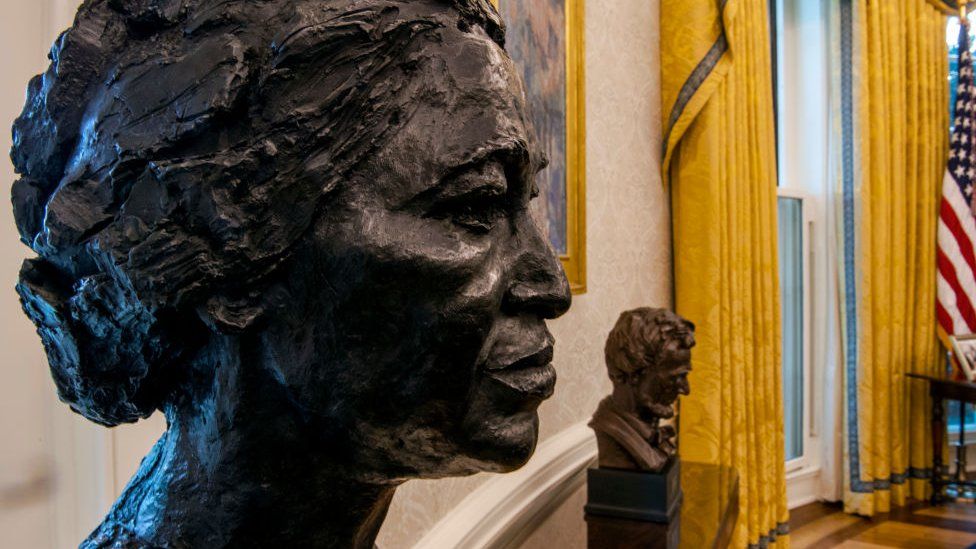 Above the fireplace hangs a large portrait of Franklin D Roosevelt, the president who led the country through the Great Depression and World War Two.

The portrait of another former president, Thomas Jefferson, has been paired with a man he frequently disagreed with, his former Treasury Secretary Alexander Hamilton as “hallmarks of how differences of opinion, expressed within the guardrails of the Republic, are essential to democracy”, the Post quotes Biden’s office as saying.

Portraits of two other celebrated former presidents, George Washington and Abraham Lincoln, have also been paired. 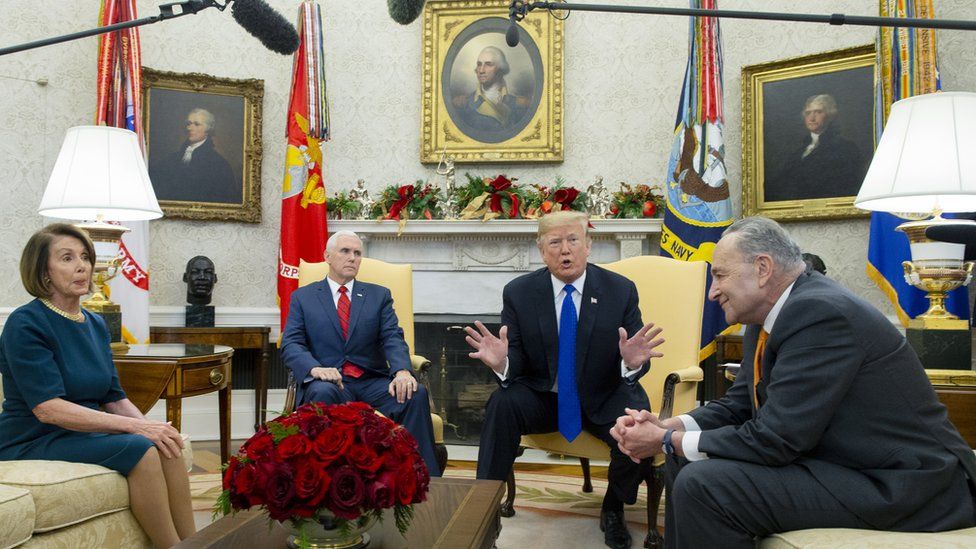 Portraits of Jefferson and Hamilton (right and left) have remained beside the fireplace, in a different arrangement, but the central portrait of George Washington has been replaced by one of Franklin D Roosevelt

Many on social media noted, on the table behind Mr Biden, a bust of César Chávez, the Mexican-American labour leader who fought for the rights of farm workers in the 1960s and 70s. His bust sits alongside framed photos of Mr Biden’s family. 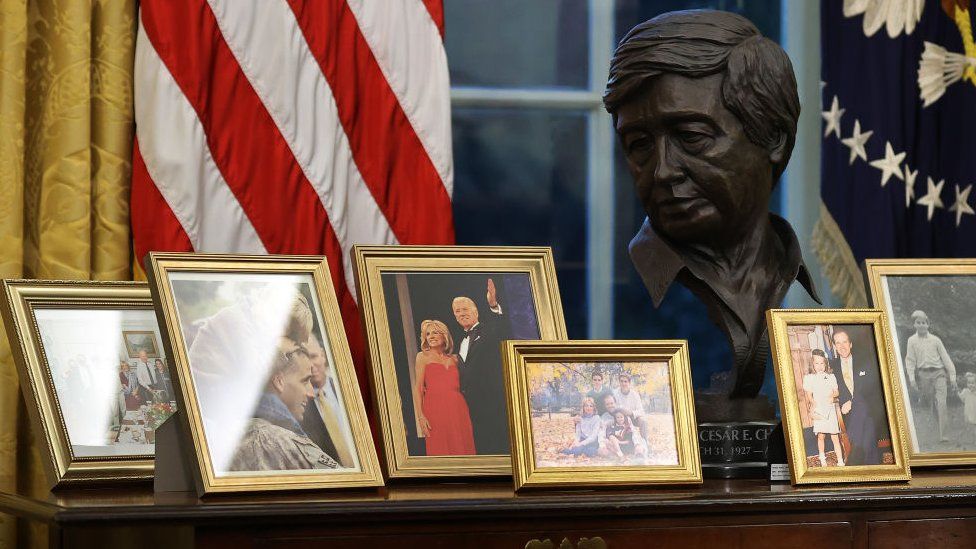 Gone on Wednesday were the gold curtains and rug that Mr Trump brought in when he assumed office in 2017. They had been replaced by a dark blue rug and darker gold curtains that adorned the Oval office when President Bill Clinton was in power, the Post reports.

Flags of the different branches of the military have also been replaced with an American flag and another with a presidential seal.

President Trump had promised to restore the bust to the Oval Office after it was removed by his predecessor Barack Obama. The then foreign secretary Boris Johnson – now UK prime minister – had at the time accused Mr Obama of having an “ancestral dislike of the British empire”.

This time, his spokesman, said: “The Oval office is the president’s private office and it’s up to the president to decorate it as he wishes”.

Charles Igbinidu is a Public Relations practitioner in Lagos, Nigeria
@https://twitter.com/ionigeria
Previous Are we really suffering from ‘Stockholm Syndrome’?
Next Anthony Martial and Manchester United’s strikers ‘do not have the same quality’ as Edinson Cavani – Pogba