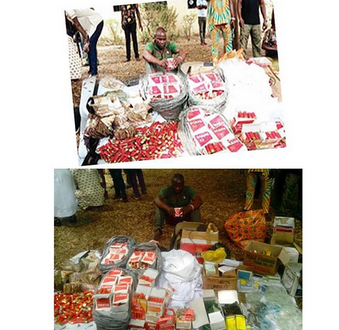 The Delta State Police Command has arrested a pastor of Salvation Army Church, Mbiri, suspected to be notorious kidnapper with 3,871 live cartridges and a loaded English made double barrel gun.Parading the suspect, the state Commissioner of Police, Muhammad Mustafa, said Rev. Ignatius Ogboi, 51, was sponsoring kidnappers and armed robbers operating within Agbor and Umunede and its environs.

Police command also recovered some prohibited drugs and over N4 million, believed to be ransom collected from kidnapped and armed robbery victims from him.

The cleric owned up to the ownership of the exhibits but denied the suspected case of kidnapping, illegal possession of a firearm and ammunition and prohibited drugs, including Tramadol, levelled against him. .

Ogboi said he only helped the vigilantes in his community to procure the recovered items found in his possession after they complained that they were buying them at exorbitant rates elsewhere.

He said: “I am still an ordained minister of God in Christ Army Church, Umunede. The bulk of the money being paraded is very small compared to what I usually have with me, if my business was still booming. I am not a kidnapper as being speculated.”

But Mustafa disagreed. He said Ogboi was doing an illegal business of the highest degree of suspicion and suspected that drugs in his possession were being used on his victims.