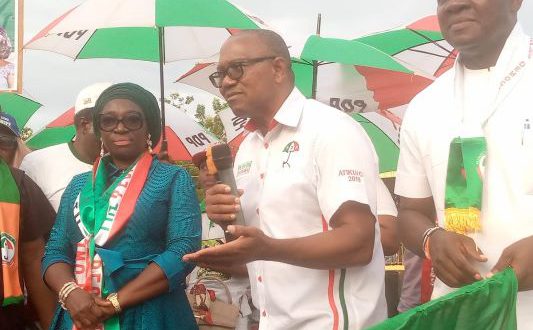 Former governor of Anambra State, Mr. Peter Obi, has apologised to the people for the role he played in the emergence of Governor Willie Obiano.

Obi, who was twice elected on the platform of the All Progressives Grand Alliance (APGA) but later defected to the Peoples Democratic Party (PDP), was significant to the victory of Obiano in 2014.

Speaking at a campaign rally of the PDP governorship candidate in Anambra, Mr. Valentine Ozigbo, in Agulu, Anaocha local government area of the state, Obi said since he handed over to him, Obiano has refused to develop the state further.

He described Ozigbo as God’s chosen and ordained man to wipe away the tears of Anambra people and restore the pride of the state.

The former governor alleged that Obiano has allowed roads, health institutions, schools, and others he built to decay and failed to build new ones.

He said Anambra will rise again when Ozigbo assumes office as governor.

Speaking at the rally, the Senator representing Anambra central, Mrs. Uche Ekwunife, said PDP must capture Anambra for the state to regain its lost glory.

She urged the people to work hard and ensure that Ozigbo wins the election come November 6.

Charles Igbinidu is a Public Relations practitioner in Lagos, Nigeria
@https://twitter.com/ionigeria
Previous Cameroonian Soldiers Intimidating Us In Our Country, Nigerian Villagers Raise Alarm
Next Manchester United told what Man City will do to them after Liverpool humiliation