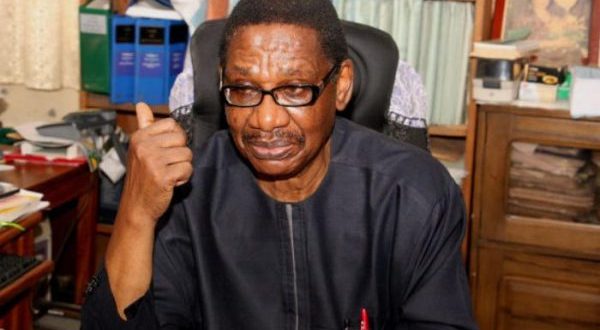 Ikoyi Whistleblower Not Stable To Receive N860m Reward, He May Run Mental – Sagay

The chairman of the Presidential Advisory Committee Against Corruption (PACAC), Itse Sagay, says the man who blew the whistle on the N13bn found in an Ikoyi apartment is not “sufficiently stable” to handle his N860 million reward.
Reacting to the alarm raised by the whistleblower’s lawyer on the delay in paying his client’s reward, Sagay said the man will “almost run mental” if the money is paid to him without proper measures.

He said the government is trying to provide the whistleblower with counsellors and consultants that will help him plan on how to invest the money. “What I gathered from my inquiry is that the man is not sufficiently stable to receive such a huge sum of money.

He is like someone who will almost run mental when he gets the money and will use it in an irresponsible manner, attracting not only undesirable people but even danger to himself,” Sagay told PUNCH.

“I think what they wanted to do for him was to provide counsellors. Not just counsellors for character and mental situation but counsellors who would be like consultants that would help him to really invest the money and plan in such a way that he doesn’t throw it away in five minutes.

They are trying to help him. Nobody is denying him anything. They are trying to help him but he just misunderstands the intention and like everyone that has been deprived for a long time, he is so desperate to have it but from what I can see, if they just give him everything, it won’t last more than a month or two because so many people will start finding ways to get to him and taking their portions from him.

So, they were just trying to help him but he became hysterical.” Funmi Adeosun, the minister of finance, on Sunday said the whistleblower will soon be paid his reward.

Previous Mother of Publisher of ionigeria.com to be buried on Dec 2
Next Presidency Reverses Okoi Obono-Obla’s Suspension