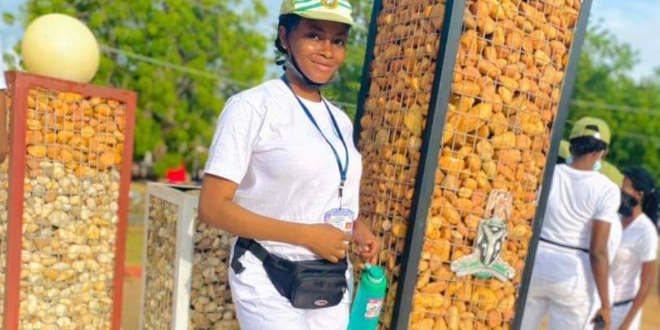 When the mother of Zaynab Sanni Oyindamola, a corps member got her redeployed from Borno State, insecurity was one of the factors she considered. Perhaps, she wanted her child to serve in a more secure environment unknown to her that fate had something else in store.

Oyindamola is one of the victims who died in the 21-story building that collapsed in Ikoyi, a highbrow area in Lagos.

Daily Trust gathered that the deceased was among the six Corps members deployed to the company. But while others escaped by whisker on the fateful day, Oyindamola got trapped in the rubbles.

A source at the NYSC confirmed to our correspondent that as of now, Oyindamola was the only corps member who died in the incident.

“Oyin as she was fondly called was a 2021 batch B corps member who was originally deployed to Maiduguri but got a redeployment to Lagos after the three-week orientation,” the source said.

Friends and colleagues have started mourning the deceased on Social Media. One Agboola Yusuf Olatunji who uploaded her pictures, said, “She was among the victims of the 21-storey building collapse at Ikoyi but we lost her. May Her Gentle Soul Rest in Perfect Peace. Sanni Zainab Oyindamola Ayinke. We love you but Almighty Allah loves you more.”

A family member, who spoke with our correspondent at the scene of the incident, said Oyindamola resumed work at the company about three weeks ago.

She said, “She has been coming here since then. We don’t even know why they sent her here. She was originally posted to Borno but her mother redeployed her. If we had known, we would have allowed her to continue her youth service in that state.

“We asked her not to go to Borno because of the insurgency but she went there for the three-week orientation and came back alive only to come and die. She was a very humble and respectful girl, she would greet everybody when she arrived from work every day. She is the first daughter of her mother and they are just two.”

Another eyewitness who sells food around the area said one of the corps members who came to buy food from her escaped by whisker.

While 22 dead bodies have been recovered and nine rescued alive as of last night, it was not clear the actual number of people that were in the building when it collapsed.

But among those trapped are said to be Mr. Femi Osibona, CEO of Fourscore Heights Limited, and the developer of the property.

Another victim was Mr. Wale Bob-Oseni, a friend of the developer who was scheduled to travel to America the day the incident happened.

It was learnt that the developer invited him from the airport to come and see the project before returning to the US only to be trapped when the incident happened.

His brother, Nurudeen Oseni who spoke with our correspondent said there was no doubt that the owner was trapped in the building.

ionigeria.com gathered that among the victims were dozens of artisans who came with an engineer believed to be a Redeemed Christian Church of God Pastor from Ibafo in Lagos.

48 hours after the incident, nobody could ascertain the actual number of people that were in the building when the incident happened.