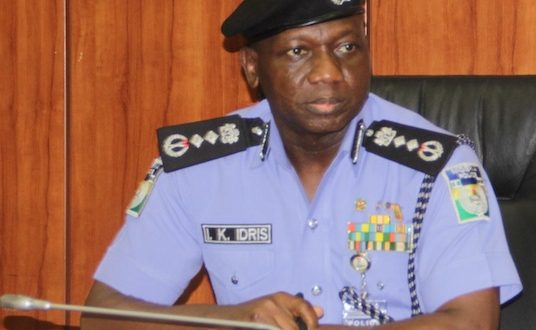 The Federal High Court Abuja, has granted the Inspector-General of Police, (IGP), Mr Ibrahim Idris, judicial leave for a review of the order to quash the Senate’s resolution declaring him unfit to hold public office.

Judicial review is a type of court proceeding in which a judge reviews the lawfulness or otherwise of a decision or action made by a public body.

The IGP prayed the court’s order granting him leave to apply for judicial review of a declaration that the Senate President, Bukola Saraki and the senate, who are the respondents in the suit, acted beyond their powers.

He is asking among others “a declaration that the respondents acted “ultra vires” in their powers under Section 88 and 89 of the 1999 Constitution.

“In the votes and proceedings leading to the resolution contained in the gazette dated May 9 imposing a penal sanction on the IGP.

“A declaration that the respondents acted ultra vires its powers under the 1999 Constitution in initiating the votes and proceedings leading to the resolution declaring the IGP an enemy of democracy and unfit to hold any public office within and outside Nigeria.

“An order of court, quashing the same entire votes and proceedings and consequent resolution of the senate declaring the IGP an enemy of democracy and unfit to hold office any public office within and outside Nigeria.”

The IGP in addition, wants an order of court quashing the report of the ad hoc committee investigating the various allegations leveled against him that led to the said resolution in the gazette.

Idris further wants the court to grant an order of perpetual injunction restraining the respondents from acting on the said resolution contained in the gazette or causing same to be acted upon by any person or authority.

Izinyon said that his client was seeking the reliefs on the grounds that as the current holder of the office created by the constitution, he either could carry out the functions of the office by himself or through delegated officers.

“It is practically impossible for the IGP to be in all places at the same time and to answer to all summons at all times and this brought about the need of using subordinate officers when the need arises.

“The IGP could not appear before the senate on April 26 because he was directed by the president to be among the presidential entourage embarking on a two-day official trip to Bauchi.

“As a result of the above, the IGP directed and delegated the Deputy Inspector-General of Police, Operations and other officers who had adequate knowledge of the subject matter to appear before the senate.

“The respondents refused to listen to and discountenanced the appearance of the subordinate and insisted that the IGP must appear in person.”

Izinyon also said that the reliefs were sought on the grounds that the respondents lacked the competence or jurisdiction to impose penal sanctions on the IGP under Section 88 and 89 of the constitution.

He finally said that the reliefs were sought on the grounds that the court had the supervisory powers to quash the said resolution contained in the gazette date May 9.

Justice Tsoho ordered that the processes be served on the respondents through the Clerk of the National Assembly and adjourned the matter until June 27, to hear the application on notice.