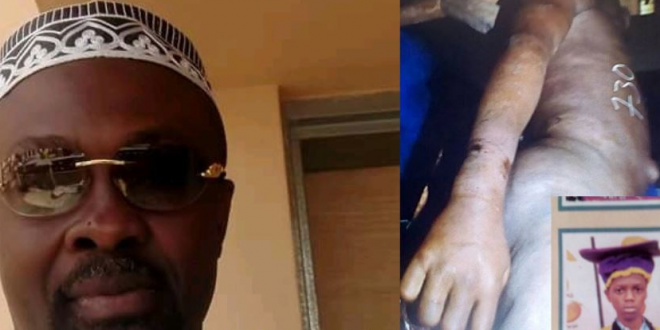 After several attempts at subverting justice, Ifeanyi Okpoko who was arrested some time last year for allegedly kidnapping and murdering one Chidera Ezeanya at Eziowelle Town, Idemili North Local Government Area of Anambra State for the purpose of using him for ritual would on February 2, appear in court at Awka.

The family of the deceased had sent an SOS to the foremost human right organization, Crusade for Justice, alleging that the suspect Ifeanyi Okpoko was trying to bribe his way out of the heinous crime by telling Police that what led to Chidera`s death was mob attack.

Recall that the body of Chidera Ezeanya was found dead and tied to a crane in Okpoko`s compound in Eziowlle with some vital organs missing. The family had alleged that Okpoko had personally arranged and paid for Chidera`s autopsy and also influenced his (Okpoko) transfer from Ogidi Police Station where he was in detention to Abuja because he knew that the aged and poverty ridden father of Chidera would not be able to go to Abuja to follow the case.

The Founder of Crusade for Justice, Barr. Richard Apo Nwankwo had intervened in the case by petitioning the Inspector General of Police as well as the National Assembly over the attempt by Okpoko to obstruct justice.
Following this move, Okpoko was taken to court and reminded, while his case file was sent to the Directorate of Public Prosecution (DPP) which early this year came out with a verdict that Okpoko should be charged with murder and that the case should commence on February 2, 2018

Speaking on the development, Nwankwo said that he is fully prepared to prosecute the case to the letter. According to him, whoever was involved in the murder of Chidera must not go free, no matter how rich he thinks he is. He said that what drew his attention to the case was the way, the deceased was tied on a crane and left over night to die. According to him ,even in war situation,it is very wrong to suffer a human being that way. His words,

“Well the DPP has released its report and the case is starting on February 2. This case has dragged for so long because of attempts to subvert justice. We have to petition the Inspector General of Police as well as the National Assembly which in-turn called on the Police to brief them on the matter. Now the case is in court and nobody knows what would happen because it is going to be a battle between the prosecution and defense counsels and I believe that both parties are competent enough to handle their job. All I want to say that we the prosecuting counsel is battle ready and we hope that at the end of the day, justice would be done.”