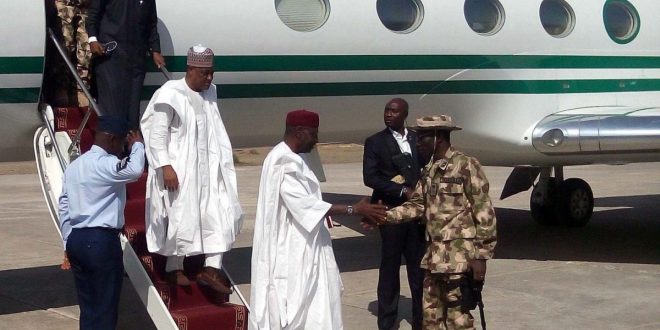 The Theater Commander of Operation Lafiya Dole, Maj. - Gen. Lucky Irabor (R) welcoming Ahaji Abba Kyari, the Chief of Staff to the President who led a Federal Government delegation team on a condolence visit to Maiduguri on Wednesday (18/1/17) over Tuesdays accidental bombing of a civilian community in Rann. 00543/18/1/2017/Ali Baba Inuwa/BJO/NAN

No fewer than 76 people have now been confirmed killed in Tuesday’s accidental Nigerian Air Force strike on an Internally Displaced Persons, IDP camp, at Rann in Borno state.

More than 100 were wounded, the International Red Cross and Red Crescent Movement (ICRC) said on Wednesday. The death toll on Tuesday was given as 52 and 120 wounded by Medecins Sans Frontieres (MSF).

The air force has said an unspecified number of civilians were killed and wounded in the mistaken strike in Borno state.

The air force regretted the accidental attack, which was aimed at Boko Haram group.

ICRC said six Nigeria Red Cross members were killed and 13 wounded. “In addition to aid staff, it is estimated that 70 people have been killed and more than a hundred wounded,” it said in a statement.

Meanwhile, President Muhammadu Buhari has dispatched a high-powered Federal Government delegation to condole with the government and people of Borno state over Tuesday’s accidental bombing of the Internally Displaced Persons camp, in Rann.

Mr Femi Adesina, the Special Adviser on Media and Publicity to the President, made this known on his twitter handle on Wednesday.

He stated that the delegation was headed by Chief of Staff to the President, Alhaji Abba Kyari, with service chiefs, Minister of Information Lai Mohammed and Minister of Defence, Retired Brig. Mansur Dan-Ali as members of the team.

“It is made of Chief of Staff, service chiefs, ministers of information and defence.’’

President Buhari, who expressed deep sadness and regret over the incident, condoled with families of the dead.

The president also wished those wounded during the incident divine succour, leading to full recovery.

He pledged Federal Government help for the state government in attending to “this regrettable operational mistake.”

Buhari, who pleaded for calm, prayed for the repose of the souls of the dead.