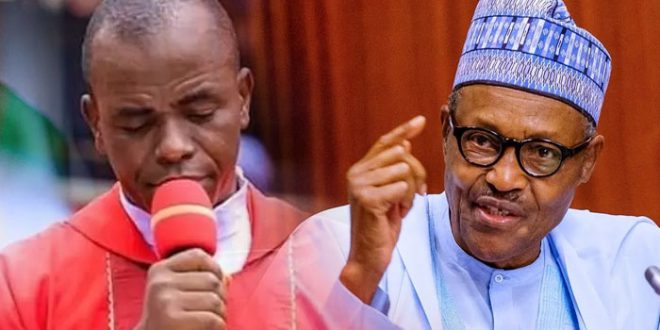 Rev. Fr. Ejike Mbaka has responded to the allegation by the Presidency that he called for the resignation of President Muhammadu Buhari because of the President’s refusal to grant his request for contracts, admitting that he took security experts to him with a view to proffering solutions to the security challenges in the country.

The Catholic Priest and Spiritual Director of Adoration Ministry Enugu said, “Yes, I led three security experts to the Presidency who offered to help salvage the security situation in Nigeria.

“I don’t know them, but they came to Enugu and pleaded for me to link them to government because of the level of insecurity and how Nigeria has been moving oil outside the country. These are the three people they rejected their offer.”

According to him: “When they talked about giving Father Mbaka contracts, I don’t want to talk about that, I was laughing. It is a laughable, childish accusation. Whoever is saying that is a shame to himself and shame to the people he is representing.

“The three men he talked about, I am not here to defend anybody’s stupid allegation but God used that man to tell the world that Buhari’s government is not giving me money.

“Shehu, may God bless you for telling everybody that you are not giving me a contract. And these are the three men that we brought that will handle insecurity for the country; they had the gadgets. The white people had the facilities. That was during the first administration.

“They said they will help them in conquering insecurity. They had the platform to end insecurity in this country under one month; under Abba Kyari. I just handed them over to the government people. They denied them of these.

“I don’t even know these people. They just came to Enugu and said, can I help them reach the government, that the level of insecurity in this country and how Nigeria has been shipping their oil out, refining and bringing them back, that we are losing.

“That they have all it takes to revive the oil apparatus in the country and get the whole youths employed and the issue of insecurity will die. These are the three people they rejected their offer, since they know how to talk.”

He berated the presidency for not having a “reward mechanism”.

“All the people they have been giving contracts, are they better than me? Am I begging them, do they know how many people I feed? Fortunately, they reported that they denied me of the contract — which contract?”

“I am happy that the truth was hitting them. We are not afraid of them. Buhari cannot do it again; health and age are not on his side. We need a stronger and an experienced goalkeeper in a time like this. If they want to put it that it was because of contract, let them come and build the highest university here and begin to mess up, I will still speak”, he added.

Mbaka last week asked Buhari to resign, calling on the National Assembly to impeach him if he fails to resign over worsening insecurity.

The Presidency fired back, alleging Mbaka started attacking Buhari because his quest for contracts was turned down.

The presidency, in a statement by Garba Shehu, alleged: “Father Mbaka asked for a meeting and to the shock of presidential aides, he came accompanied by three contractors.

“The President graciously allowed them in, and to everyone’s surprise, Father Mbaka asked for contracts as compensation for his support.”