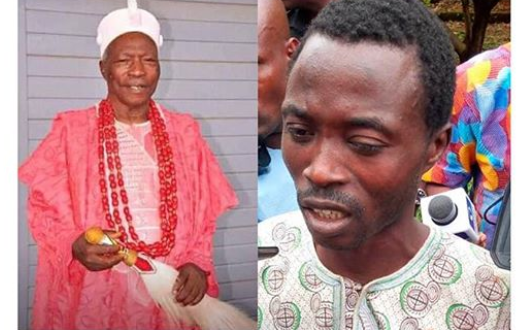 I Killed The King To Claim The Throne – Suspect

Spread the love
One Omoniyi Ademola has revealed that he killed a traditional ruler in Ekiti State, Oba Gbadebo Ogunsakin, in order to take over his throne.

Ademola killed Oba Ogunsakin, the Onise of Odo on Monday. Oba Ogunsakin, 80, who was enthroned in 1986, was stabbed to death with a knife in his palace on Monday after a meeting.Speaking while being paraded in Ado Ekiti on Friday, Ademola, a member of a royal family in the community, said he attacked the monarch in order to claim his “right.”

He claimed that his family had nominated him to take over from the late king whom he said was serving as a hindrance.

His words: “The crown didn’t belong to Oba Ogunsakin because the town last year declared the stool vacant.

They said our Oba was dead and my family nominated me to take over only for him to resurface again and said he remained the Oba.

Last December, my family nominated me and since then I have been trying to take over (the throne). That day when I got to the palace, it was the Oba that first attacked me and I attacked him back which led to his death.”.