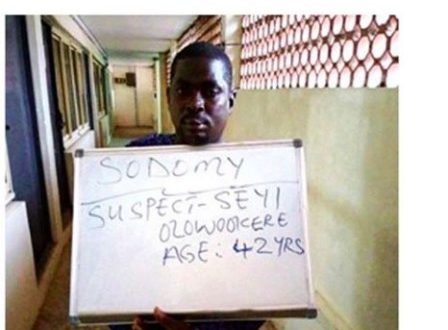 The Lagos police command has arrested a certain Seyi Olowookere, a 42-year old driver for sodomizing a 12-year-old boy.

The suspect, who confessed to sodomizing 7 other individuals including adults reportedly lured the boy from a football field to his house at Alhaji Marshal Road, Surulere, Lagos.

speaking on the issue, the victim said;

“I was playing football with my friends when Mr. Seyi asked me to freestyle for him because I am a rapper.

I rapped a few songs for him and he asked me to come with him that he will help me. When we got to his apartment, he removed his clothes and asked me to do same. And then from behind, he inserted his manhood into my anus.

He begged me to suck his breast, I said no. When he was done, he pleaded with me not to tell anyone but when I got home, I couldn’t keep it to myself. So I told my parents, who got the Police involved.”

Seyi, on his part said;

“I promised to help him when I saw him playing and singing with his friends. I asked him to follow me that I will help him. When we got to my house.

I locked the door, asked the little boy to take of his clothes and kneel down after which I inserted my manhood inside his anus from behind and the little boy wasn’t shouting. I have been doing this for a long time.

I have done it with seven people including adults. I am not a ritualist. I am a native of Uso in Ondo state. I want the police to help me in this case. I am a driver, I was married but we have separated. And I have a child.”

Lagos State Police Command, Chike Oti, confirming the incident stated that the case was still under investigation and that the suspect will be charged to court.