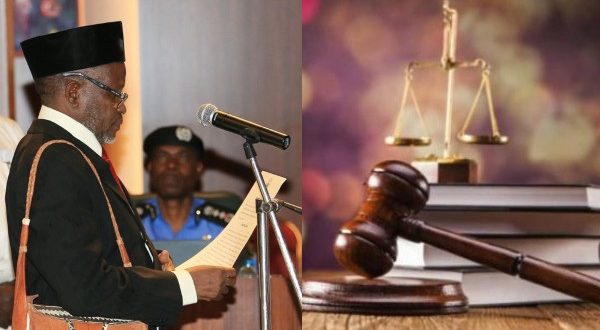 I have lost my independence – Chief Justice of Nigeria, Tanko Muhammad cries out

The Chief Justice of Nigeria (CJN), Justice Tanko Muhammad cried out over loss of his independence while speaking at the 2019 General Conference of the Nigerian Bar Association (NBA) at the Eko Hotel, Victoria Island, Lagos.

Alleging that the Judiciary is not truly independent financially, the Chief Justice of Nigeria (CJN) promised that the arm of goverment which he heads won’t lose “its firm grip on the mantle of honesty, transparency and integrity” because of it.

He said: “By the grace of Almighty God, I will tenaciously hold on to that, even until that very moment of my last breath on earth.

“Let me assure this assembly that we don’t look at anybody’s face or feelings before making our decisions.

“If there is any deity to be feared, that deity is the Almighty God. We will never be subservient to anybody, no matter how highly placed.”

Also warning that the Supreme court will not hold back punishments from “blatant abusers of the court processes”, Muhammad pleaded with those preventing judicial independence to desist.

“Please, all that are concerned, let us enjoy our independence. If you say that I am independent, but in a way whether I like it or not, I have to go and bend down, asking (for funds) I have lost my independence” Muhammad said.

However the Attorney General of the Federation (AGF) and Justice Minister Abubakar Malami (SAN) who represented President Buhari at the event, insisted that the Presidency is not dictating to the third arm of government.

The Nation reported that he reiterated the Buhari-led administration’s commitment to strengthening institutions, Malami added that the current government has in time past accepted unfavourable court judgments.

He said: “We have had to disrupt the age-long wrong assumptions and historical narratives of the presumed immunity of sacred cows in our society, simply to demonstrate that henceforth the law will be used as a potent instrument to regulate the activities of all persons and institutions in our country in a fair and transparent manner.”

Charles Igbinidu is a Public Relations practitioner in Lagos, Nigeria
@https://twitter.com/ionigeria
Previous One dead, many injured as cement truck collides with a BRT bus in Lagos (photos/video)
Next ‘The Nigerian brand is damaged’ – Reuben Abati writes on FBI’s recent arrest of Nigerian fraudsters