Home / News / International News / ‘I have died many times. That’s where I have beaten Christ’ – Mugabe’s most controversial quotes 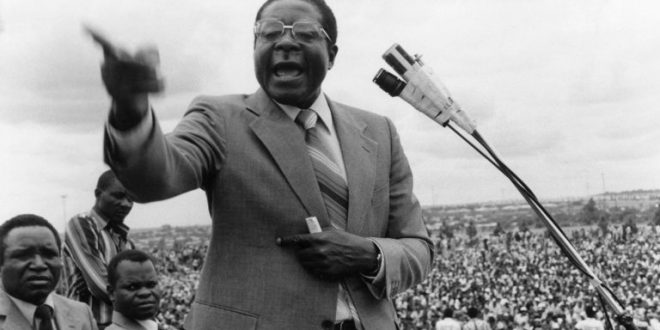 Robert Mugabe was known for being outspoken about controversial topics

‘I have died many times. That’s where I have beaten Christ’ – Mugabe’s most controversial quotes

The news that Zimbabwe’s former president Robert Mugabe has died has undoubtedly evoked opposing emotions from many.

Mugabe, who passed away aged 95, was known for being outspoken about controversial topics. He famously vowed to rule the nation until he died, claiming he had been appointed by God, and was infamous in the western world for his views on homosexuality, Jesus Christ and Hitler.

Here, we look back on some of his most telling quotes.

‘I am still the Hitler of the time. This Hitler has only one objective, justice for his own people, sovereignty for his people, recognition of the independence of his people.

‘If that is Hitler, then let me be a Hitler tenfold.’ – State funeral of a cabinet minister, 2003.

‘They are worse than pigs and dogs… Those who do it, we will say, they are wayward. It is just madness, insanity.’ – ZDC radio interview, 2015.

‘We equally reject attempts to prescribe ‘new rights’ that are contrary to our values, norms, traditions, and beliefs. We are not gays!’ – UN General Assembly, 2015.

‘The British were brought up as a violent people, liars, scoundrels and crooks… I am told that [Tony] Blair was a troublesome little boy at school.’ – 2001.

‘Mandela has gone a bit too far in doing good to the non-black communities, really in some cases at the expense of (blacks)… That’s being too saintly, too good.’ – 2013.

‘We have this American president, Obama, born of an African father, who is saying we will not give you aid if you don’t embrace homosexuality. We ask, was he born out of homosexuality? We need continuity in our race, and that comes from the woman, and no to homosexuality.’

‘Since President Obama endorses the same-sex marriage, advocates homosexual people, and enjoys an attractive countenance – thus if it becomes necessary, I shall travel to Washington D.C, get down on my knee, and ask his hand.’ – During a speech, 2003

‘Africa must revert to what it was before the imperialists divided it. These are artificial divisions which we, in our pan-African concept, will seek to remove.’ – A speech at Salisbury, 1962.

‘It could never be a correct justification that because the whites oppressed us yesterday when they had power, the blacks must oppress them today.’ – 1980.

‘You are now our enemies because you really have behaved as enemies of Zimbabwe. We are full of anger. Our entire community is angry and that is why we now have the war veterans seizing land.’ – 2000.

‘Our party must continue to strike fear in the heart of the white man, our real enemy.’ – A ZANU-PF rally, 2002.

‘Our economy is a hundred times better, than the average African economy. Outside South Africa, what country is [as good as] Zimbabwe? … What is lacking now are goods on the shelves – that is all. – Interview, 2007.

‘Only God who appointed me will remove me – not the MDC [opposition], not the British.’ – Election rally, 2008.

‘My decision to resign is voluntary on my part. ‘It arises from my concern for the welfare of the people of Zimbabwe and my desire to ensure a smooth, peaceful and non-violent transfer of power that underpins national security, peace and stability.’ – Resignation letter, 2017.