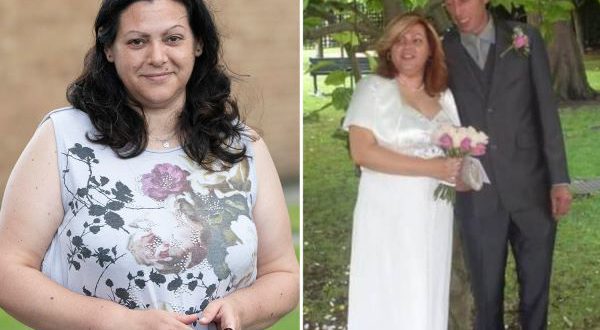 A wife was left in shock after she discovered her husband was already married and had a daughter.

Maria Guillen Garcia suspected husband Tom McCabe hadn’t been honest with her when she found pictures of his family on his phone.

Support worker Maria said McCabe, who she met through a lonely hearts ad in 2009, “seemed to be in a hurry to get married” after only knowing him for nine months.

But unsuspecting of him, she decided to continue with the wedding but when she arrived at the register office – her groom was missing.

Maria was about to miss her slot to tie the knot with Tom McCabe when he burst in clutching a bouquet. He said: “I just had to get you some flowers.”

Seven years on, Maria discovered that the reason for the jitters was that he was already married.

Maria said: “He’s a compulsive liar. Maybe he thought his wife and I would never find out about each other. Unfortunately for him, I’m not stupid.”

She also ended up in £21,000 of debt after bankrolling McCabe.

McCabe, 51, said he had never been wed and he and ex of 14 years, Bridget O’Connell, had not had kids.

However, his lies were exposed when Maria helped him update his phone software and saw photos of his first family on Facebook and discovered that they had not divorced and that he had a daughter, aged 23.

Police quizzed McCabe in 2016 but he fled and was found in Hyde End, Bucks, earlier this year.

The court heard he originally claimed Bridget, who lives in Ireland, had told him they were divorced. They wed in 1995 and split up in 2004.

A date is to be fixed for sentencing. Bigamy carries up to seven years’ jail.

Bigamy is the act of entering into a marriage with one person while still legally married to another.

He said he loved me but I was his cash cow

She said: “He said he loved me but I was his cash cow.”

Maria told the court: “I have been living a life with him for nearly seven years and he caused me to land in over £21,000 of debt, pushing me to get loan after loan, borrowing from the bank and my colleagues.

“Money he said was for a van, for certificates to do work and for a surveyor for a house he said he had bought.”

In 2013 Maria left him after they were unable to pay the rent and were evicted from their house, but he begged her to come back and they gave it another go.

However, she was suspicious as she had never met his family.

In 2015, McCabe’s mobile phone needed a software update and Maria took it to work so a colleague could help.

When she confronted McCabe about the photos he made excuses.

Bridget, now 58, replied in 2016 to Maria’s Facebook message, saying: “If he married you he is a bigamist, as we are not divorced.”

Maria called the police and flew to Spain after leaving a copy of her  marriage certificate with the words “null and void” written across it, her wedding ring and a note which said: “I want you out by the time I get back.”

She is now with a new man Marco Lopez, 40, and has not ruled out getting married again.
Share

Charles Igbinidu is a Public Relations practitioner in Lagos, Nigeria
@https://twitter.com/ionigeria
Previous Trump demands Biden ‘resign in disgrace’ in statement as he slams president over Taliban in Afghanistan, Covid & border
Next Tenant from hell filled home with 8,000 beer cans and knee-deep waste after telling landlord he left ‘a bit of mess’