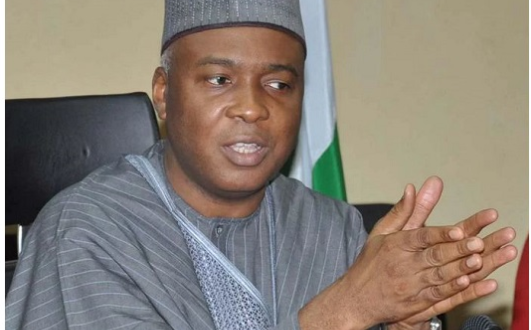 I Am On My Way Out Of APC – Saraki

Crisis rocking the ruling, All Progressives Congress, APC on Tuesday at the floor of the Senate took a new dimension as fifteen senators on the platform of the party have dumped it for the Peoples Democratic Party, PDP.

Saraki Senate President, Dr. Bukola Saraki read a letter from the Fifteen Senators who left, just as he said that he was also on his way out from the APC.

The letter reads thus: “Dear Senate President after due consultation with our constituents and stakeholders in our constituencies, in proper recognition of section 68(1G) of the 1999 Constitution as amended and with the fact our party, the All Progressives Congress (APC) is hereby emerging factions.

“We hereby inform the Senate that we the undersigned are changing our political affiliation from the All Progressives Congress (APC) to the Peoples’ Democratic Party (PDP).

“We thank you for your exemplary leadership.” Shortly after reading the letter, Saraki also announced that Sen. Murtala Nyako has also indicated his intention to leave the APC, bringing the total number of defectors to 15.

With this number of new senators in the PDP, the party now holds the majority seats in the upper legislative chamber.

Speaking after the defection, Saraki who expressed displeasure at the siege on his residence and those of other lawmakers, said that it was uncalled for.

“People have the freedom of association. I have been sitting down here and more than 15 senators have decamped or defected to one party or the other. There was no siege on their residence,” he said.