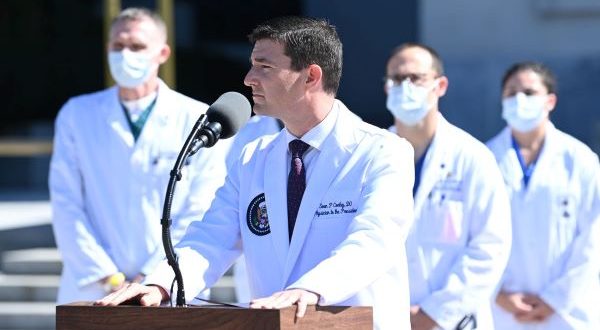 “I am feeling Well”, says Trump, thanks Doctors, Nurses other staff of Walter Reed

The President of the United States of America, Donald Trump has broken his more than 12-hour silence on Twitter, he posted on Saturday that he was “feeling well” and he praised the doctors, nurses and other staff at Walter Reed Military Medical Centre where he is receiving treatment after testing positive for coronavirus.

Doctors, Nurses and ALL at the GREAT Walter Reed Medical Center, and others from likewise incredible institutions who have joined them, are AMAZING!!!Tremendous progress has been made over the last 6 months in fighting this PLAGUE. With their help, I am feeling well!

White House physician Sean Conley said Saturday that President Trump is doing “very well” after being hospitalized with coronavirus and that his symptoms of a mild cough, nasal congestion and fatigue are improving, while sidestepping questions about Trump’s treatment and creating uncertainty about the timeline of his diagnosis.

“At this time the team and I are extremely happy with the progress the president has made,” Conley told reporters outside Walter Reed Medical Center, where Trump was hospitalized Friday evening. “Thursday, he had a mild cough and some nasal congestion and fatigue, all of which are now resolving and improving.”

At the same time, a source familiar with the president’s health told reporters that the president’s vitals over the past 24 hours were “very concerning” and described the next 48 hours as “critical in terms of his care.”

“We’re still not on a clear path to a full recovery,” the person said.

The statement, which was not on the record, seemed to diverge considerably from Conley’s positive assessment and quickly created confusion about Trump’s condition less than 24 hours after he was admitted to the military hospital in Bethesda, Md.

Conley did not give a date when he expects Trump to be released from the hospital, but said the president has been fever-free for over 24 hours after experiencing a fever “Thursday into Friday.” Conley declined to disclose the specific temperature of the president’s fever.

At the first press briefing from a doctor since Trump announced his positive test early Friday morning, Conley danced around questions about whether the president had ever been on oxygen, repeatedly saying he was not currently on it. He later said that Trump had not been on it Thursday, Friday or Saturday. Conley also said that Trump has not experienced difficulty breathing.

“More than anything, he’s felt run down,” Conley told reporters.

Conley also raised new questions about the timeline of Trump’s diagnosis when he described Trump as “72 hours” into his diagnosis. The White House revealed Trump’s positive test in the early hours of Friday morning, which was less than 48 hours ago.

A White House official later clarified Conley’s remarks, saying that he meant to say that it is day three of the president’s diagnosis, not 72 hours. The official reiterated that Trump was diagnosed late Thursday night.

Conley later issued a memo correcting his statement to clarify that Trump was diagnosed on Thursday evening and that he was given an experimental antibody cocktail on Friday, rather than 48 hours prior.