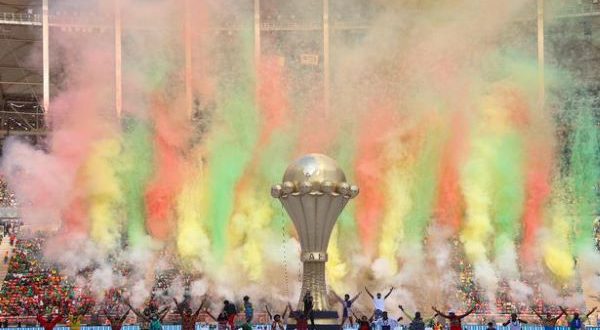 Hosts Cameroon started this year’s Africa Cup of Nations in style with a thrilling 2-1 victory against Burkina Faso on Sunday.

A brace from captain Vincent Aboubakar helped the five-time champions recover from a goal down to claim all three points in Yaounde.

Thousands of fans were delighted to see the tournament, which was delayed by 12 months due to the Covid-19 pandemic, get under way at the Olembe Stadium.

The afternoon started with a vibrant opening ceremony, which featured dancing, singing and even a giant replica of the trophy.

Cameroon dominated proceedings early on, boasting the bulk of the possession and firing three wayward efforts towards Herve Koffi’s goal.

Captain Vincent Aboubakar was the hero for Cameroon in Yaounde ( Image: Getty Images)

They failed to find the breakthrough, though, and were made to pay when the visitors opened the scoring in the 24th minute.

Burkina Faso skipper and Aston Villa ace Bertrand Traore – the only Premier League player on display in the AFCON opener – saw his header cleared off the line before Ajax stopper Andre Onana had a moment to forget.

The rumoured Inter Milan target flapped at the ball as it was crossed back in from the left, only to do the exact same when a third delivery of the attack came in from the right.

Gustavo Sangare, who plays for Ligue 2 outfit Quevilly-Rouen, was waiting for Onana’s second mistake and fired home a brilliant volley to score the first goal of the tournament.

Burkina Faso weren’t celebrating for long, though. Cameroon were awarded two penalties shortly before half-time and their skipper – Al-Nassr striker Aboubakar – calmly converted both of them.

And Aboubakar was unfortunate not to get his hat-trick, with VAR judging him to be narrowly offside after finding the back of the net for a third time in the second half.

Cameroon will now be hoping to secure their place in the knockout stage of the AFCON with three points against Ethiopa on Thursday.

Burkina Faso, meanwhile, will be looking to bounce back against Cape Verde – who take on Ethiopa on Sunday evening – on the same day.

Former Cameroon international Geremi, who won the tournament in 2000 and 2002, has backed his country to challenge for the title.

“You don’t have to play very well to win the tournament, but you must take it game by game,” the former Chelsea and Real Madrid star told the Daily Mail ahead of Sunday’s game.

Charles Igbinidu is a Public Relations practitioner in Lagos, Nigeria
@https://twitter.com/ionigeria
Previous  Arsenal dumped out of FA Cup by Nottingham Forest
Next Top 10 biggest transfer spenders in last 10 years as Man City and Man Utd fork out a combined £2.87billion on transfers