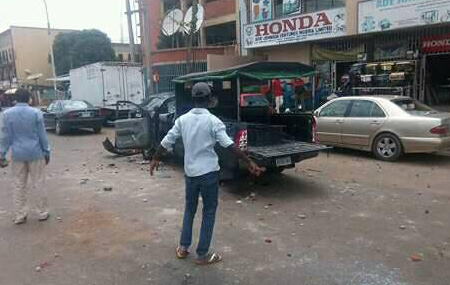 Chaos and commotion broke out early today in Kaduna state after Shiite Muslims attacked some police officers who were patrolling the metropolis ahead of the arraignment of embattled leader of the Islamic Movement in Nigeria also known as Shi’ite, Sheikh Ibrahim El-Zakzaky.

A policeman was reportedly killed in the process as the protesters attacked them with stones and other weapons.

Major highways leading to Kaduna High Court along Independence Way in Kaduna metropolis were on shutdown over the arraignment of the Shiite leader.

All exits and entrances leading to the court located in Gabasawa police station have been cordoned off, causing undue hardship to commuters.

Meanwhile, a reliable source told newsmen that the case will not hold  today. The source said the judge was absent after being involved in an accident.

The source who did not want to be name said: “The judge went to a barber’s shop on Wednesday and after parking his car, he started to walk towards the shop when he was hit by an incoming tricycle.”