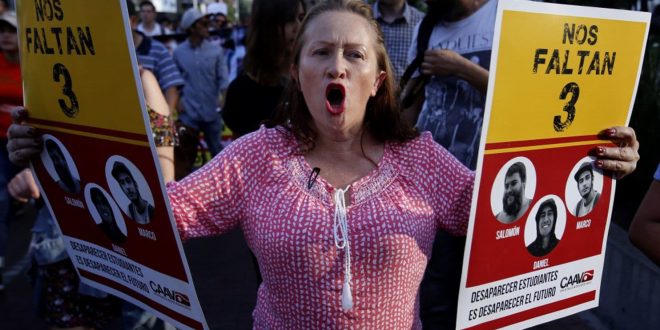 Relatives and friends of three missing students from the University of Audiovisual Media, take part in a demonstration demanding their loved ones to return alive, at the “Ninos heroes” roundabout in Guadalajara, Jalisco State, Mexico, on April 19, 2018. ULISES RUIZ/AFP/Getty Images

HORROR: How three students were killed, bodies dissolved in acid

Last month, three Mexican university students were filming a school project when they disappeared. The last time they were seen alive, they were being forced into a car by two armed men dressed as police officers in Guadalajara, Mexico’s second largest city, in the western state of Jalisco.

The disappearance of the three film students, 25-year-old Javier Salomón Aceves Gastélum and 20-year-olds Marco García Francisco Ávalos and Jesús Daniel Díaz, prompted protests across Mexico and drew outrage from the international filmmaking industry, including Oscar-winning director Guillermo del Toro. Thousands of enraged college students and others marched the streets of Guadalajara and Mexico City, demanding that officials bring the three young men home safely. “We’re students, not criminals,” they shouted. “Will I be next?”

For more than a month, the case of the missing students remained a mystery. But on Monday, Mexican authorities revealed gruesome details from their investigation.

After they were abducted, the film students were beaten and killed, and their bodies dissolved in acid, the attorney general’s office in Jalisco said in a televised news conference Monday.

The students, who authorities say had no connection to any criminal gangs, found themselves inadvertently enmeshed in an ongoing conflict between two drug cartels. Members of Mexico’s most powerful cartel, Cartel Jalisco New Generation, may have confused the students with members of a rival drug cartel, the attorney general’s office said. Authorities have arrested two suspects in connection with the crime and have issued arrest warrant for six others, all believed to be part of a cell of Cartel Jalisco New Generation.

The students’ deaths became the latest example of the lives upended by violence in a country that just marked its deadliest year in modern history, with more than 25,300 homicides.

“There are no words to comprehend the magnitude of this madness,” del Toro, a Guadalajara native, tweeted early Tuesday. “3 students are killed and dissolved in acid. The ‘why’ is unthinkable, the ‘how’ is terrifying.”

In a news conference Monday, the attorney general’s office laid out a timeline of what may have led up to the students’ deaths.

The three young men hailed from different parts of Mexico but were all students at the University of Audiovisual Media in Guadalajara. They had been working on a film project in a house they were told belonged to one of their aunts, located in Tonala, a city outside Guadalajara.

But it turns out the home was also used as a safe house for a gang known as the Nueva Plaza cartel, headed by a leader known as El Cholo, according to the attorney general’s office. In 2015, a prominent member of that cartel, Diego Gabriel Mejía, had been detained at the house alongside other members. (Authorities said Mejía and the student’s aunt both had ties to a massage parlor that served as a prostitution business.)

Because Mejía was soon to be released from prison, members of his rival gang, Cartel Jalisco New Generation, began keeping a close watch on the safe house. The presence of the three young men on the property may have raised their suspicions, the Jalisco attorney general’s office said.

“Without knowing it, the students were in a place of grave risk, watched by a criminal cell of the Cártel Nueva Generación,” the Jalisco attorney general’s office said.

Then, on March 19, the three students, along with a fourth classmate and three other young people, were leaving the area when one of their cars broke down. Two pickup trucks pulled up, and six heavily armed men approached them, authorities said. The armed men, dressed as law enforcement officers, ordered everyone to get down on the ground.

Then, they forced the three students, Gastélum, Ávalos and Díaz, into one of their trucks and drove them to a house used by the cartel to interrogate and torture victims, authorities said.

“It is here that they begin to beat one of them,” chief investigator Lizette Torres said in the news conference. While interrogating the students, the suspects ended up beating one of them so brutally that he died. Therefore, “they had to execute the other two,” Torres said.

Authorities say the suspects then took the bodies of the students to another location, where they dissolved them in acid. Investigators found 46 barrels of sulfuric acid at the site, and believe that other bodies may have been disposed of there. Cartels in Mexico are known to dissolve, burn or dismember bodies as a way to eliminate evidence of crimes.

Officials said they found DNA evidence linked to two of the students at two of the three homes. When asked whether she was certain if all three students were dead, Torres said investigators “logically inferred” that to be the case.

“The indignation that the case of the three students awakens in society is absolutely justified,” Aristóteles Sandoval, governor of Jalisco, tweeted Monday. “As a father I am hurt and shocked; as an authority I will fulfill the commitment I made with the relatives of the victims to continue investigating.”

Jalisco experienced a year of record violence in 2017, with 1,369 homicides. It is home to the powerful Cartel Jalisco New Generation, a network of traffickers and assassins who “have shot down an army helicopter, ambushed federal police and sent a pig’s head to the former attorney general’s home,” as The Washington Post’s Joshua Partlow wrote last year. The cartel stemmed from the remnants of another group, the Milenio cartel, and it makes money by selling guns, stealing gasoline, extortion and kidnapping.

Missing persons cases in Mexico often go unsolved. In a high-profile case in 2014, 43 student teachers protesting education reforms were stopped by police officers who opened fire at them. They were never seen again. Their disappearance led to international outrage, drew condemnations from President Barack Obama and Pope Francis, and became a turning point in the administration of Mexican President Enrique Peña Nieto.

The government later said the 43 students were captured by police and handed over to drug cartel assassins, who shot them and burned their bodies. But in a report, outside experts later said the government’s narrative was wrong. More than 100 people have been arrested in the case.

On Monday night, mourners gathered at a vigil in Jalisco to honor the three film students. Scores of Mexicans poured out their anger and frustration over the alleged killings — and too many other deaths across the country — on social media, using the hashtag #NoSonTresSomosTodos, meaning “It’s not three, it’s all of us.”

“The rage, the impotence, things can’t keep going like this,” another said.

“The most vile and nauseating, the story that never ends, the reality that surpasses fiction,” wrote another. “We continue to suffer every day. … Enough!” 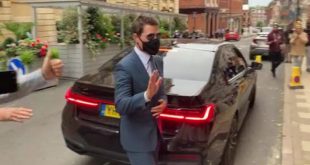