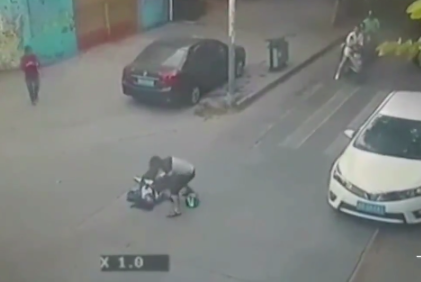 The horrific moment a man brutally stabbed his wife in the middle of a busy street was captured on camera.

According to reports, Lian Tong’s husband suspected her of having an affair so he went after her as she was on a bike, pulled her down from it then stabbed her multiple times. In the harrowing video, the husband can be seen talking to her while she was on a bike. As she moves to drive away, he blocks her and continues to talk to her. He then reveals a weapon and she starts to run. He finally catches up with her when she gets to the middle of the road and stabs her continuously until she falls to the ground.

Onlookers can be seen standing at a safe distance, looking alarmed. He eventually walks away, leaving his wounded wife on the floor. Some moments later, he returns and slashes her neck.

See the video below.