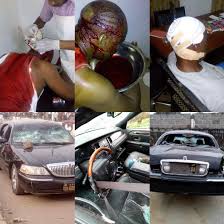 Hoodlums suspected to be from Igbo axis of Ilaje LGA of Ondo State attacked Oba Odidiomo Ayowole while he was holding a family meeting at the residence of Baba Adepiti on Wednesday, according a report.

The thugs, numbering about ten, invaded the venue of the meeting with dangerous weapons and brutalized the defenseless traditional ruler. It was gathered that the monarch, a former student leader, was likely trailed down from Mahin where he had gone to attend a burial meeting of the late Amapetu of Mahin Kingdom, Oba Lawrence Omowole. .

The thugs also vandalized the Oba’s Lincoln Town Car. The young king, who returned home from Europe years ago, has been under attacks from thugs likely sponsored by another traditional ruler, Obateru Akinrutan, an oil magnate who became the Olugbo of Ugbo Kingdom under controversial circumstances.

Residents of Ilaje LGA are worried about the continued orchestrated violence by the tyrannical Olugbo in the area and have appealed to the Ondo State government and security agencies to call the Olugbo to order.