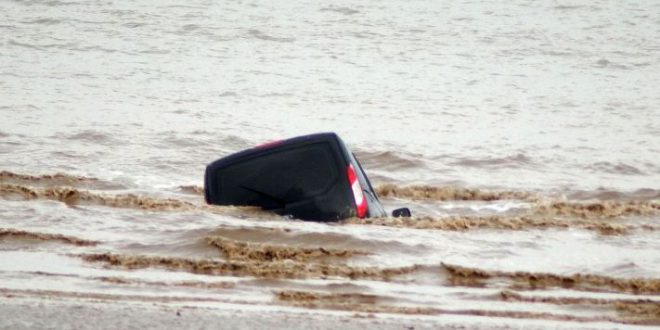 There was nothing the hapless holidaymaker could do when the tide came in (Image: Kennedy News/Tim Curtis)

A holidaymaker who drove on the beach to get a good view of the sea could only stand and watch helplessly as the tide claimed his car.

The seven-seater Ford was submerged as the water rose and the heavy vehicle became stuck in soft muddy sand.

Coastguard volunteers were called out but one furious witness said the driver should be forced to “pick up the recovery bill” himself.

It took around an hour between the car getting stuck in the sand at Weston-Super-Mare, Somerset, South West England, and the tide coming in.

Amateur photographer Tim Curtis saw the despondent tourist return to his van to assess the damage but said the large vehicle was a write-off after being hit by four tides over at least two days.

The unsympathetic 61-year-old said: “He deserves it. I have absolutely no sympathy.

“Most normal people would wait for the tide to come in, not go out to the tide. The water is a quarter of a mile away and this idiot decided to drive out to it.

“I can’t believe it. After about 100m of the beach it’s soft mud, but he kept traveling about 200m before he got stuck. Nobody can believe he drove that far.

“I’ve got a 4×4 and when I go off the sand, the ground gets a little bit softer. Anyone with a brain would reverse back. It’s common sense.

“There’s loads of signage on the beach. I knew it wasn’t a local. It had to be a holidaymaker, and it was.

“Some people will do anything for a free car wash, but it’s not recommended. I don’t think his insurance company will be very happy.”

Somerset coastguards have had to rescue numerous holidaymakers who drove too close to the water this summer.

Tim says people who live near the coast have grown annoyed at the “lack of common sense” shown by British holidaymakers and that they must begin to heed the warning signs.

Tim Curtis, 61, was unimpressed and railed against tourists flouting rules on the beach ( Image: Kennedy News and Media)

He added: “There’s signs on the beach saying ‘please don’t park beyond here’ but nobody apart from the locals take any notice. You can’t put up signs for idiots.

“I just feel sorry for the people that have got to pull the car out. I hope they give him the bill.

“The bloke just walked away once the tide came in. I don’t know where he went but he probably went to clear his head somewhere.”

The local coastguard unit confirmed details of the incident and said no one had been hurt or needed rescued.

Matt Greatorex, Weston-Super-Mare Coastguard Rescue Team station officer, said: “Once the tide had come in around the vehicle we stood down.

“The owner was making arrangements to recover the vehicle, and as a rescue team we have not been involved since.”

Charles Igbinidu is a Public Relations practitioner in Lagos, Nigeria
@https://twitter.com/ionigeria
Previous Afghan stowaway trapped in landing gear of US plane after jumping on wheels to flee Taliban
Next Biden’s Taliban speech branded ‘one of the most shameful in US history’ after ‘washing his hands’ of Afghans