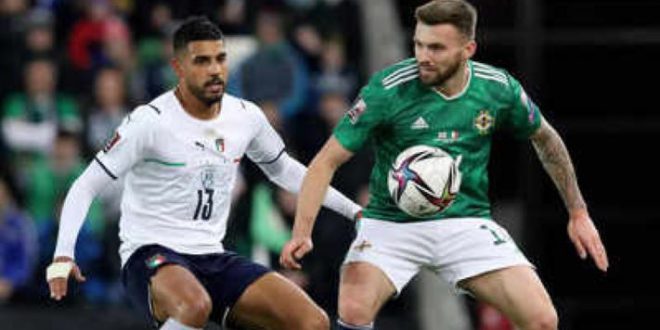 They famously beat the Azzurri at Windsor Park in 1958 to qualify for that year’s finals in Sweden at their expense.

And on Monday night Northern Ireland brilliantly frustrated Roberto Mancini’s European champions, who must now try and reach Qatar through the play-offs after Switzerland beat Bulgaria to top the group.

The result was easily the finest of Ian Baraclough’s 20-match reign and it has restored some pride for the Northern Irish after a difficult campaign.

They did not concede in their four qualifiers at home and might have sneaked a famous win when Stuart Dallas shot agonisingly wide and Conor Washington had an effort cleared off the line.

Insigne failed to capitalise on Italy’s best chance from Tom Flanagan’s square pass when he cut inside Craig Cathcart, only to shoot weakly with his left foot and Peacock-Farrell saved easily.

Northern Ireland went close when Gavin Whyte picked out Jamal Lewis on the left and he teed up George Saville to hit a shot, which was well saved by Gianluigi Donnarumma.

Italy became desperate and Peacock-Farrell was alert to save Bernardi’s free-kick at his near post.

Then came Dallas’ big moment when fired wide before Washington had a shot cleared off the line in the final minute.

The Chelsea midfielder blazed the 90th-minute spot-kick over the bar after Giovanni Di Lorenzo cancelled out Steven Widmar’s goal in the first half at the Stadio Olimpico.