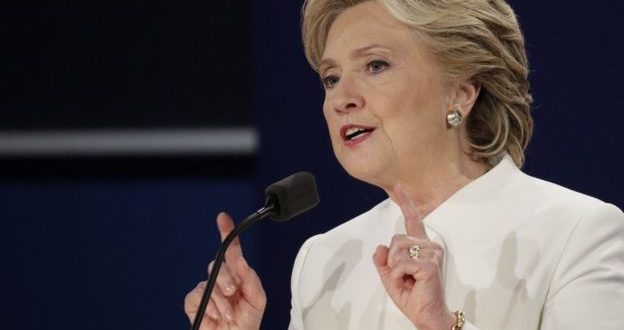 Barring any miracle, Hillary Clinton is set to emerge as the first female President of the United States of America. Apart from being ahead in opinion polls conducted by different organisations including Fox News (overtly loyal to the Republican Party), Mrs Clinton was also voted winner of the third and last Presidential debate on Wednesday.

There were no handshakes or pleasantries between Hillary Clinton and Donald J. Trump in their final debate, which moved quickly from a discussion of policy to a flurry of personal attacks.

She called him a “puppet” of Russia, he called her “a nasty woman.” While Mr. Trump appeared sharp and steady in the early moments of the debate, his refusal to say he would accept the results of the election and his meandering answers on foreign policy led many commentators and critics to declare that Mrs. Clinton was the clear winner.

He called Mrs Clinton a liar and a “nasty woman”.

He said the women accusing him of sexual harassment bordering on assault were either attention-seekers or Clinton campaign stooges.

He said the media were “poisoning the minds” the public. And, most notably, he refused to say whether he would accept the results of the election if he loses.

Mrs Clinton had her own moments where she was put in the defensive – on her emails, on the Clinton Foundation and on embarrassing details revealed in the WikiLeaks hack.

The difference, however, is that Mrs Clinton largely kept her poise and successfully changed the topic back to subjects where she was more comfortable. It was, in fact, a master class in parry-and-strike debate strategy.

The key takeaway from this debate, however – the headline that Americans will wake up to read in the morning – will certainly be Mr Trump’s refusal to back way from his “rigged” election claims.

That was what Mr Trump wanted to say, but it isn’t something the American people – or American democracy – needed to hear.

Mrs Clinton’s skill at deflecting attacks and baiting Mr Trump into unhelpful answers first was on display when moderator Chris Wallace brought up a line from one of her Wall Street speeches – revealed in the Wikileaks hack – that she endorsed a hemispheric free-trade and open-immigration zone.

After saying she was only talking about an open energy market – an assertion that seems somewhat questionable – she tried to turn the question into a discussion of whether Mr Trump would renounce the Russian government, which US officials have said is behind the cyber-attack.

Mr Trump actually called Mrs Clinton out on her attempted “great pivot” – but then he went on to get bogged down on the Russian issue.

He said he’d never met Mr Putin (although he boasted during a primary debate that he had talked with him in a television green room), and said that Mrs Clinton was a liar and the real Russian “puppet”.

Oh, and this all came up when the debate topic was supposed to be immigration.

Mrs Clinton’s next chance to pull a rhetorical switch-a-roo came during the economic portion of the debate. After a discussion of their tax proposals – and a predictable exchange of allegations over who’s cutting and who’s raising them too much – Mr Trump went after Mrs Clinton on her past support of trade deals.

When she waffled a bit, he tried to tag her with a line he used in an earlier debate with some success.

Why didn’t Mrs Clinton enact her economic reforms over her 30 years in the public sphere? Mr Trump asked.

“You were very much involved in every aspect of this country,” he said. “And you do have experience. I say the one thing you have over me is experience, but it’s bad experience, because what you’ve done has turned out badly.”

The problem with reusing attack lines is that sometimes your opponent prepares a defence – and Mrs Clinton had a scathing response ready to fly.

She said that while she was defending children’s rights in the 1970s, Mr Trump was defending himself against charges he engaged in housing discrimination against African-Americans.

When Mrs Clinton was speaking out for women’s rights as first lady in the 1990s, Mr Trump was taunting a beauty contest winner about her weight. And when she was in the White House situation room watching the raid on Osama bin Laden’s compound, Mr Trump was hosting a television reality show.

“I’m happy to compare my 30 years of experience, what I’ve done for this country, trying to help in every way I could, especially kids and families get ahead and stay ahead, with your 30 years,” she said.

It was a scripted set-piece, yes, but it drew blood.

Quick on the heels of the exchange about experience came the question Mr Trump had to expect – but didn’t appear ready for. What did he think of all the women who had come forward since the last debate to allege that, when it came to sexual harassment, Mr Trump’s actions matched his candid words in that recently revealed recording?

The Republican nominee’s response was that the women were either attention-seekers or Clinton campaign stooges and that the allegations have been “largely debunked” – which, when you think about it, isn’t exactly a blanket denial.

In the last debate, Mrs Clinton appeared to hold back a bit in her condemnation of Mr Trump on the topic.

“He goes after their dignity, their self-worth, and I don’t think there is a woman anywhere who doesn’t know what that feels like. So we now know what Donald thinks and what he says and how he acts toward women. That’s who Donald is.”

Mr Trump’s response, that no one respects women more than he does, was met by laughter in the debate hall and the nearby media hall.

Mrs Clinton brushed off his efforts to turn the topic to her private email server.

He may have lost this election even without the live-mic revelation two weeks ago, but it’s becoming increasingly clear his campaign has been irreparably wounded by it.

During the presidential “fitness” portion of the debate, Wallace had some pointed questions for Mrs Clinton, as well.

He asked her to defend the Clinton Foundation against allegations it was a pay-to-play organisation that granted insider access to the state department in exchange for big-money donations.

Mrs Clinton responded by defending the foundation’s actions – noting its high ratings from non-profit watchdogs and its global health efforts.

Mr Trump called it a “criminal enterprise” – but then Mrs Clinton was able to push the conversation to Mr Trump’s foundation, which has had its own share of controversies.

She noted that Mr Trump had used foundation money to purchase a six-foot portrait of himself. “Who does that?” she asked.

Mr Trump tried to defend himself, but Wallace wouldn’t let him off the hook, asking him why he used charitable money to settle a fine levied on his Florida resort.

The Republican’s response was only that the money had gone to charity.

An exchange on the Clinton Foundation could have been – perhaps should have been – a winning moment for Mr Trump. Instead, it was another opportunity for Mrs Clinton to knock him off his stride.