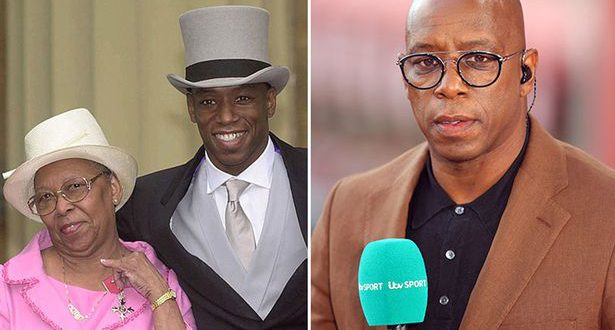 Arsenal legend Ian Wright was told that his mum had died just 30 seconds before going live on air during ITV ‘s FA Cup coverage on Sunday.

The 58-year-old was watching Rochdale and Plymouth Argyle ‘s second-round clash when he received the news and left at half-time.

Mother Nesta, who was 94, raised Wright in Brockley, south London.

Having been in his usual buoyant mood during the first half of the match, presenter Mark Pougatch informed the audience of the Gunners icon’s early departure during the break.

“Ian, I’m afraid is not [with us],” Pougatch said. “A family bereavement, so he has gone to where he is most needed – with his family.”

Wright was told that his mother, Nesta, had died as he was about to go on live TV

The former England forward appeared alongside ex-Rochdale striker Grant Holt at the Crown Oil Arena, with Plymouth scoring a late goal to send them into the third round.

Wright retired from playing in 2000 but remains a regular on football coverage in the UK.

A staple of BBC’s Match of the Day punditry team, he also works for ITV to cover England and the FA Cup.

And Wright has even recently branched out into hosting a game show, with Moneyball being shown on ITV on Saturday nights.

Sunday’s game in Lancashire saw Plymouth claim a hard-earned victory against their League Two hosts in a closely-fought contest.

Ryan Lowe’s men took the lead in the first half through Jordon Garrick’s header.

But Rochdale rallied in the second period and their efforts were rewarded when Aaron Morley hit a long-range strike just before the hour mark to make it 1-1.

With a replay on the south coast looking more than likely, Argyle snatched a win through Luke Jephcott, who fired home to book their place in round three.

The Green Army, who had made the long trip up from Devon in the early hours of Sunday morning, will be hoping to handed a Premier League team at the next stage.

Non-league side Yeovil Town are also in the hat thanks to their 1-0 victory over League Two side Stevenage on Saturday night.

Wright was on FA Cup punditry duty for ITV

Elsewhere, League Two’s Salford City were knocked out by National League opposition in Chesterfield, as Kidderminster Harriers from the sixth tier came out on top at home against Halifax Town.

The final tie of the round takes place on Monday when Boreham Wood host St Albans City, meaning another non-league side are guaranteed to be in the hat for the famous third round.

The draw will take on Monday night at 7pm, prior to the Boreham Wood’s match