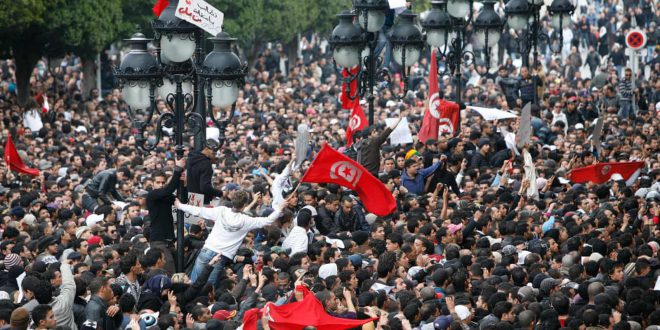 Protests in front of the interior ministry building in Tunis on 14 January 2011. Photograph: Lucas Dolega/EPA

‘He ruined us’: 10 years on, Tunisians curse man who sparked Arab spring

Thanks in part to Mohamed Bouazizi’s self-immolation, Tunisians are freer than before, but many are miserable and disillusioned

by Michael Safi in Sidi Bouzid

His act of despair still shakes the Arab world. Mohamed Bouazizi, the 26-year-old fruit seller whose self-immolation triggered revolutions across the Middle East, has a boulevard named after him in Tunisia’s capital, Tunis. In his home town of Sidi Bouzid, he is depicted in a giant portrait facing the local government headquarters.

But a decade since he set himself on fire in protest at state corruption and brutality, Bouazizi is out of fashion in Tunisia – along with the revolution his death inspired. His family have moved to Canada and cut most ties with Sidi Bouzid. “They were smeared,” says Bilal Gharby, 32, a family friend.

In Sidi Bouzid’s main street a passerby, Fathiya Iman, 54, when asked what she thinks of Bouazizi, looks to his picture across the road. “I curse at it,” she says. “I want to bring it down. He’s the one that ruined us.”

Qais Bouazizi, a cousin to Mohamed, says their surname was once a symbol of Tunisian pride. “Now the city of Sidi Bouzid and the last name Bouazizi feel like a curse,” he says.

Myths about Tunisia – cradle of the protest movements, the lone success story, flag-bearer for Arab democracy – crumble the further one drives from the country’s Mediterranean coastline into the neglected hinterlands whose rage fuelled the ousting from power of Zine al-Abidine Ben Ali, the long-serving authoritarian president, in January 2011.

Ten years later, Tunisian is a democracy. It has withstood assassinations, terrorist attacks and the ideological gulfs of its leaders, at crucial moments pulling back from the precipice of returning to authoritarian rule, as happened in Egypt, and of civil war, as in Syria, Yemen and Libya.

Tunisians are freer to criticise their leaders than before, and their elections are honest. Yet people are miserable and disillusioned, joining jihadi groups in among the largest numbers per capita of any country in the world, and making up the majority of boat-borne migrants to Italy this year. 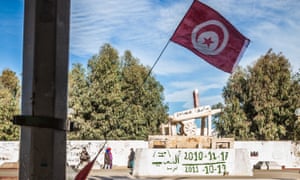 The avenue named for Mohamed Bouazizi in Sidi Bouzid.

For most, the revolution has been experienced as a drop in living standards. Economic growth has more than halved since 2010, and unemployment is endemic among young people, who make up 85% of the jobless. “Nothing changed,” says Ashraf Hani, 35, who saw from his kiosk across the road Bouazizi ignite himself after his produce and cart were confiscated. “Things are moving to the worse.”

Debates that occupy Tunis, such as whether women should have equal access to inheritance, or whether the presidency should be reserved for Muslims, feel remote to people in Sidi Bouzid, says Qais Bouazizi, 32. “It’s far away from the social questions the revolution was raised for. Our foremost slogans were about work and dignity.”

On the outskirts of Kairouan, a desert city an hour from Sidi Bouzid, Aisha Quraishi, 60, says the corruption that characterised the Ben Ali era still blights her life. Foreign aid was directed to the area to build small brick huts for her and other women to sell bread by the roadside. Most of the money vanished, she says, and she still works from a hovel made of wood and tarpaulin. 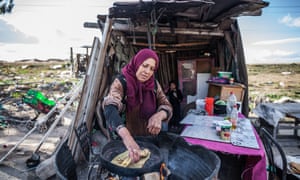 Aisha Quraishi in front of her tent where she sells bread. Photograph: Ons Abid/Guardian

“We won a little freedom,” she says of Ben Ali’s overthrow. “Under him we couldn’t speak. But does this affect my life? I want freedom and dignity. Can’t I have both?”

The fruits of the revolution are most obvious at the Bardo Palace, the 15th-century museum and parliament in the capital, where protesters stage sit-ins and legislators bicker under ceilings ornamented in gold leaf, in architecture that blends Roman, Islamic and European styles.

The easy merger of eras and cultures that makes up modern Tunisia is cited as one of the reasons it has sustained a democratic experiment that elsewhere was short-lived or nonexistent. Analysts also point to its small, apolitical army, and a civil society that found ways to flourish despite authoritarianism, giving the nation ballast when Ben Ali fell.

Geography helped, too. “Tunisia has always been sort of removed from the centre of gravity in the Arab world and was less significant due to its size and lack of natural resources,” says Safwan Masri, a senior research scholar at Columbia University. “It was marginalised by the rest of the Arab world and not significant in terms of larger geopolitical games.”

Others argue Tunisia’s uniqueness is exaggerated, and that in moments where it could easily have gone the way of other Arab spring states, it was rescued by wise decisions. In the room for many of these was Ouided Bouchamaoui, the former head of the country’s employers federation and now a Nobel laureate.

By the middle of 2013, feuding between the Islamist Ennahda party and secularists had frozen talks over a new constitution. When two leftist leaders were assassinated by suspected jihadis, Tunis swelled with enraged protesters. A similar movement in Egypt had just brought down the Muslim Brotherhood government, whose supporters were massacred in the streets. 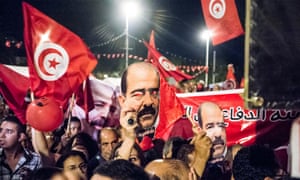 “Believe me, after the first [assassination], then the second one, we were afraid we’d lose our revolution,” Bouchamaoui says. “It would’ve been a civil war, or confusion everywhere, and we’d be like Libya.”

Along with three other civil society leaders, Bouchamaoui asked the country’s political antagonists to sit around a table for last-ditch negotiations. “To be very frank with you, what helped us was the situation in Egypt,” she says. “Ennahda was afraid we would have the same situation here.”

But the quartet also needed to persuade opponents of the Islamists that they could not simply shut them out of the system. “Democracy is accepting others,” Bouchamaoui remembers telling recalcitrant opposition leaders. “We cannot ask for democracy and then say we do not agree with the results of elections. This is democracy.”

Their success paved the way for successive free elections and won Bouchamaoui and her colleagues the 2015 Nobel peace prize. But years of fighting over Tunisia’s identity has left little oxygen for addressing the economic problems that drove the revolt. 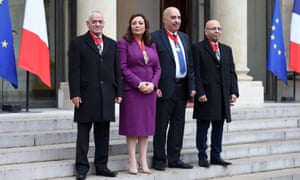 Saida Ounissi, 33, a former minister with Ennahda, says implementing reforms in a free country is hard. She recalls a meeting with international consultants pushing Tunisia to float its currency the way Egypt did in 2016 to attract foreign investment. “They said it hit the [Egyptian] population quite hard in the beginning, but now after two years it’s giving results,” Ounissi recalls.

“I said to them, we can’t afford the two years,” she says. “We’re a democracy. The political power cannot take a decision knowing it’s going to be very hard for a majority of the population, because there are elections in this country. People can demonstrate.”

Feeding off of the stagnation is a growing nostalgia for the old regime, embodied by the rightwing populist Abir Moussi, a lawyer and MP who harks back to the “stability” of the Ben Ali era and receives friendly coverage on Saudi Arabian and UAE-owned news channels.

Voter turnout has been falling in Sidi Bouzid since the first free elections in 2011. Hichem Amri, a social activist, says the city is so far unimpressed by the system, though not for the reasons that sometimes gain currency in western capitals. What ails Tunisian democracy is not a fundamental incompatibility with Islam, nor some authoritarian strain in Arab politics. Rather, he says, it is something that has come to resonate more loudly in Washington and London over the past 10 years: a feeling that democracy as it is practised works only for an elite in Tunis and along the coast, without reaching far enough into communities such as Sidi Bouzid to give people a say over the forces that shape their lives. 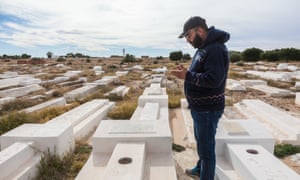 There is little that marks out Mohamed Bouazizi’s grave in an unfenced cemetery on the outskirts of his ancestral village. “This is the first time I’ve been here since he was buried,” says Mohamed Tlili, a former schoolmate. He spends a few minutes on an overcast afternoon searching the plain white tombstones for his friend’s name.

Bouazizi became a symbol who inspired resistance in millions of people and, later, among some, resentment. When he finds the plot, Tlili pauses over it for some time, remembering Bouazizi, the man.

“He died and other people won,” he says, referring to the former regime officials, exiles and political prisoners who have come to occupy Tunisia’s highest offices. “They never dreamed of being where they are. But because of him, they’re there.”