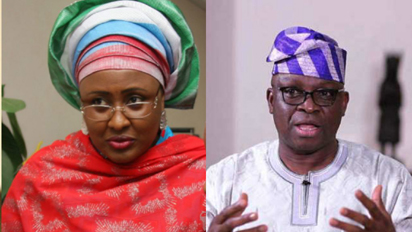 Counsel to Governor Ayodele Fayose of Ekiti State, Chief Mike Ozekhome, SAN, has replied the wife of President Muhammadu Buhari, Mrs Aisha Buhari through her counsel, Mary Ekpere & Co, saying the governor’s claim as regards her involvement in the infamous Halliburton scandal was correct and justified in law.

In the letter dated July 8, 2016, Ozekhome affirmed that the statement made regarding the involvement of Mrs Aisha Buhari in the Halliburton scandal was “correct and justified in law, having regards to a court judgment convicting one Mr William Jefferson for bribery in the Halliburton case.”

Counsel to the president’s wife, Mary Ekpere & Co had written to Governor Fayose on June 22, 2016, demanding a retraction of the governor’s statement that the President’s wife was involved in the Halliburton scandal, threatening legal action if the retraction was not made within five days.

However, Ozekhome said the statement of Governor Fayose was correct and justified, having been factually premised on an existing court judgment.

The letter read; “Our client has referred to us your letter dated June 22, 2016, on alleged defamation of the character of your client , Her Excellency, Mrs Aisha Buhari, the wife of Muhammadu Buhari, GCFR, with firm instructions to reply to and reject same in its entirety.

“Our client states and reaffirms categorically that the statement he made as regards the involvement of Mrs Aisha Buhari, the wife of President Buhari, in the Halliburton scandal, is correct and justified in law; having regards to a court judgement convicting one Mr William Jefferson for bribery in the Halliburton case.

“Therein, the name of the President’s wife featured conspicuously. At page 22 of the said judgment delivered by the United State District Court, Eastern District of Virginia, Alexandria Division, USA, in criminal No 1: 07CR209, the said Mr William Jefferson was sentenced at 9.00 am on November 13, 2009, by Mark D, Lytle. Your client, Mrs Aisha Buhari was specifically mentioned in the judgment.

The judge referred to Exhibits 36-87 in the following words, for clarification; “See also Government Exhibits 36-87 (6/26/02 $170,000 wire transfer from account in Nigeria in the name of Aisha Buhari to an account in the name of The ANJ Group, LLC, identifying “William Jefferson” as Beneficiary)… Given the age of the defendant, the severity of the sentence calculated by the Probation Office, the defendant’s frequent travel overseas and unexplained wire transfers from overseas locations to financial accounts used by the defendant, the defendant cannot rebut the presumption at sentencing that he is a risk of flight.

“The said Williams Jefferson is currently serving a jail term in the USA and to the best of our client’s knowledge; this judgment has not been challenged, or set aside by any Appellate court of law anywhere in the world.

“The statement of His Excellency, our client, is therefore correct and justified, same having been factually premised on an existing court judgment above referred to.”

On the immunity enjoyed by Governor Fayose against civil and criminal proceedings, the Senior Advocate of Nigeria said; “Your attention is also hereby drawn to Section 308 of the Constitution of the Federal Republic of Nigeria, 1999, as altered, on the immunity enjoyed by our client from civil or criminal proceedings for the period that he occupies the office of the governor of Ekiti State.

“You may therefore advise your client to wait until after 16th October, 2018, when our client’s tenure expires. When that happens, we shall join issues with your client in a competent court of law, in the event that your client does not have a change of heart.’’

Ozekhome insisted that there are documentary evidences to support the governor’s claim that Mrs Buhari was indeed mentioned in the scandal.

Charles Igbinidu is a Public Relations practitioner in Lagos, Nigeria
@https://twitter.com/ionigeria
Previous Police recovers N60.25m out of N100m stolen by Bullion van Driver in Port-Harcourt
Next Is Oshiomhole, APC candidate in the September 10 Governorship election?