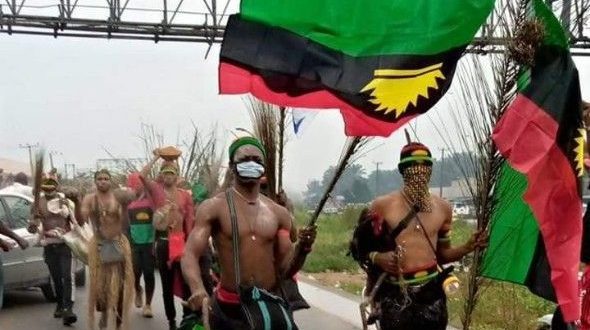 Gunmen suspected to members of the outlawed Indigenous People of Biafra (IPOB), on Tuesday, stormed a Catholic Church in Onitsha, Anambra State.

The gunmen, who invaded the church while service was ongoing, queried the parish priest on why he was celebrating a mass when their leader, Nnamdi Kanu, was on his way to court.

Kanu was arraigned before a Federal High Court in Abuja on Tuesday morning.

A worshiper said there was almost a stampede as the young men forced their way into the church.

She stated that the angry youths confronted the priest, who was said to have used tact and diplomacy to pacify them.

Daily Trust also gathered that the suspected IPOB members burnt a tricycle they found on the road and beat its rider to a pulp.

The witness said “This morning I went for the 5:30 am morning mass in my church at St Theresa of Kalkuta Parish in Awada, it is close to Ukaegbu junction.

“We were halfway into the mass when some group of boys suspected to be members of IPOB entered the church. They were carrying sticks and even fuel. They went straight to the altar and were almost halfway there.

“They approached our parish priest, Rev Fr Joseph, and asked him why he was celebrating Mass on a day when their leader was going to court. They were quite a number of them who were visibly angry.

“Everybody in the church took to their heels. There would have been a stampede because there were a lot of people at mass today. I ran to a building close to the church.

“Father Joseph told them we were holding mass today to pray for the release of Nnamdi Kanu. He used diplomacy, and even asked them if they were really for Ndi Igbo or Against Ndi Igbo? They now said okay, that if so, the people in the church were for them.

“They then called back everyone to continue the mass that they were now convinced that the church people were Biafrans. Some of us were so afraid that we could not return, so we went home from there. They apologised to the priest and left.

“The same group went out and saw a tricycle rider. No one knows why the man was outside because, on sit-at-home days, you hardly find tricycles outside. They beat up the man and burnt his tricycle.”