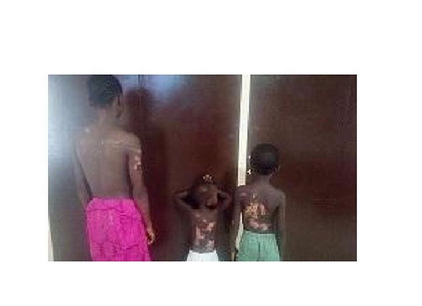 Grandma Said We Gave Her HIV, Flogged Us With Hot Machete – 3 Orphans

The three female siblings, aged 13, 5 and 3 years respectively, whose HIV-positive grandmother branded as witches at a community in Cross River State, have revealed how she conspired with some persons to beat them with red-hot machete to coerce them to confess to witchcraft.
The eldest sister said: “We are not witches, our grandmother made us to confess what we are not. We dropped out of school in 2016 when our mother died; we also lost our father in 2014.

We do not belong to any witchcraft world. We are normal children; she made us to sell sachet water before we can eat once a day. .

She is our grandmother, she normally brings people like Uncle Aniekan to punish us with hot machete and he flogged us with it after it had been heated up in fire. They will use it to flog us to confess that we were responsible for her sickness.”

Barr. James Ibor, the Principal Counsel to Child Protection Network and Basic Rights Counsel Initiative, BRCI, the NGO that took up the matter, said they got the grandmother arrested but was later granted bail because she was HIV-positive and was like a walking corpse.

“The old woman in question has a terminal illness, for which she has refused to continue taking drugs as prescribed and recommended, but she decided to blame her condition on the children.

She was aware of her status and was placed on anti-retroviral drugs, but she stopped taking them and decided to say her children were sucking her blood,” Ibor asserted.

When contacted, the Police Public Relations Officer, PPRO, Cross River Command, ASP Irene Ugbo, confirmed the incident, adding that the matter was under investigation and all the parties involved would be made to face the consequences of their actions.