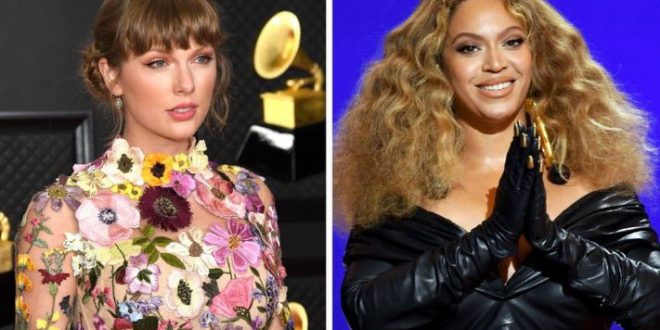 Beyoncé has set a new record at the Grammy Awards with her 28th win.

“I am so honoured, I’m so excited,” she said while accepting her record-breaking trophy, for best R&B performance.

Taylor Swift also made history at Sunday’s ceremony, by becoming the first female artist ever to win album of the year three times.

The star was rewarded for her lockdown album Folklore – after previously winning with Fearless in 2010 and the pop opus 1989 in 2016.

Only three other artists have ever won the album of the year prize three times: Frank Sinatra, Paul Simon and Stevie Wonder.

Beyoncé’s 28th Grammy was presented in honour of Black Parade, a celebration of black power and resilience, which she released on Juneteenth last year.

“As an artist, I believe it’s my job to reflect the times, and it’s been such a difficult time,” she said as she collected the award.

“So I wanted to uplift, encourage, celebrate all of the beautiful black queens and kings that continue to inspire me and inspire the world”.

The star has now equalled super-producer Qunicy Jones’ total of 28 Grammys. Only classical conductor Sir Georg Solti has more, with 31.

The Houston musician picked up the prize for her breakout hit Savage (Remix), on which Beyoncé delivers a guest verse.

Black Parade was not the only award-winner song to reflect the Black Lives Matter movement: R&B singer H.E.R. won song of the year for I Can’t Breathe, which quotes the last words of George Floyd.

The 46-year-old died while being arrested by police in Minneapolis last year. His death, along with that of Breonna Taylor, sparked a global wave of protests.

Accepting the prize, H.E.R. said she never imagined “that my fear and my pain would turn into impact”.

The singer, whose real name is Gabriella Wilson, was accompanied by her co-writer Tiara Thomas, and she recalled how they’d written I Can’t Breathe “over FaceTime” last summer.

“I recorded this song by myself in my bedroom at my mom’s house,” she said. “And I want to thank my dad – he cried, he was in tears when I wrote the song and I played it for him. He was the first person I played it for.”

“But remember,” she concluded. “We are the change that we wish to see and you know that fight that we had in us the summer of 2020, keep that same energy. Thank you.”

‘Bringing the concert to you’

Aside from the awards, the four-hour ceremony deliberately put the focus on live music.

“I know that you haven’t been able to go to a concert in a long time,” said host Trevor Noah. “So tonight we’re bringing the concert to you.”

The show kicked off with three back-to-back performances from Harry Styles, Billie Eilish and Haim, who performed from a circle of stages that recalled the set-up of Jools Holland’s BBC TV show.

The song went on to win best pop solo performance later in the ceremony, making him the first member of One Direction to win a Grammy – either as a solo artist or as part of the group.

“It’s crazy to think someone that talented and handsome is from the same place as Boris Johnson,” joked Noah as Styles’ performance ended.

Billie Eilish, who dominated last year’s ceremony, followed with her ballad Everything I Wanted; while Haim played The Steps from their album-of-the-year nominated Women In Music Pt III.

Eilish’s song later won record of the year – her second consecutive win in that category. Her Bond theme, No Time To Die, was also awarded best song written for visual media.

“It was a dream to make the song,” said the 19-year-old. “I have no words. I can’t believe this is real. I couldn’t believe it was real then…”

The majority of the ceremony was held in a marquee outside the LA Convention Center, with nominees sitting at socially-distanced tables.

“So there’s more tension in that tent than at a family reunion at Buckingham Palace,” joked Noah, who added: “Tonight is going to be the biggest outdoor event this year, besides the storming of the Capitol.”

Other prize-winners included Dua Lipa, who picked up best pop vocal album; and Lady Gaga and Ariana Grande, who became the first female duo to win best pop collaboration for Rain On Me.

One of the most emotional speeches came from Megan Thee Stallion, who dedicated her best new artist prize to her mother, who died of a brain tumour in 2019.

“She couldn’t be here with me tonight,” she had said on the red carpet earlier in the night. “But she always knew that I would be at the Grammys, and I would be like, ‘Oh mom, that’s so far away’ but it came so quick.

“And I’m just so appreciative that I’m here.”

Performance highlights included Taylor Swift, who sang a medley of songs from her lockdown albums Folklore and Evermore, from an enchanted forest set.

Cardi B and Megan Thee Stallion got together for the first ever TV performance of their X-rated single WAP, while Bruno Mars and Anderson .Paak unveiled their new “supergroup” Silk Sonic, channelling the 70s soul sounds of Earth, Wind And Fire.

The show also highlighted the plight of music venues by having staff from venues, including New York’s Apollo Theater and LA’s Troubador, present some of the awards.