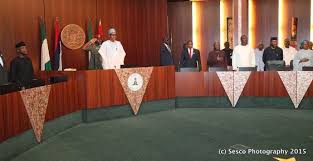 Governors Want FG To Hand Over Federal Roads To States

The governors of the 36 state of the federation in Nigeria have called on President Muhammadu Buhari to handover some of the roads belonging to the Federal Government to them to fix.

This was part of their demands at the National Economic Council meeting presided over by Vice President Yemi Osinbajo at the Presidential Villa in Abuja.

The Ebonyi governor said it had become clear that the federal government lacked the required funds to fix roads.

Ahmed on his part said despite being faced with the challenge of paying salaries, states could fix roads through a Public-Private Partnership arrangement.

Previous Pastor Victor Ajisafe Arrested In Sierra Leone Over Hate Speech Against Islam
Next Only Nigerians Can Determine If I’ll Become President, Not PDP – Ayo Fayose