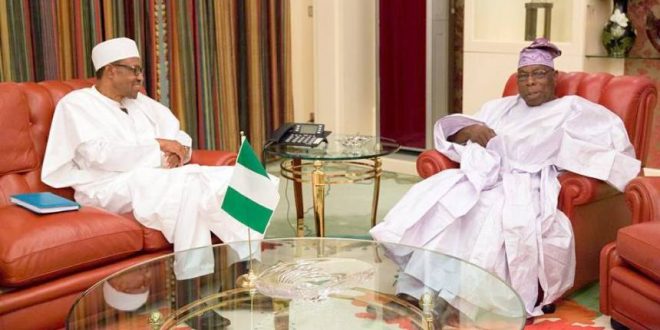 A former Nigerian president, Olusegun Obasanjo, is mobilising politicians and other Nigerians to sign on to his Coalition for Nigeria project, to oust President Muhammadu Buhari from office.
Many of those consulted by Obasanjo are said to have signed on to his elaborate plan for a mass movement away from the ruling APC, and his former party, PDP, to “rescue” the country.

Obasanjo described the two parties as “wobbling” and unfit to run Nigeria. On Tuesday, the former president issued a scathing public commentary on the Buhari administration, advising the president to take a “deserved rest” and urging Nigerians to vote him out should Mr. Buhari insist on running.

Impeccable sources told  the former president repatedly discussed his concerns with Mr. Buhari, and then decided to go public after he noticed no improvement in the way the country is governed.

Frustrated by the worsening political and security situation of the country, Mr. Obasanjo spent the last few months consulting key political leaders in the country.

He then used the better part of January drafting and editing what is now the explosive “special press statement” that has shaken the nation’s political foundation.

Obasanjo has held meetings with former Nigerian leaders, serving governors, lawmakers and other key leaders across the country before arriving at the decision. .

“At the last count, seven governors, 20 senators and over 100 House of Representatives members have agreed in principle with Baba to go into this coalition,” a close associate of the former president told