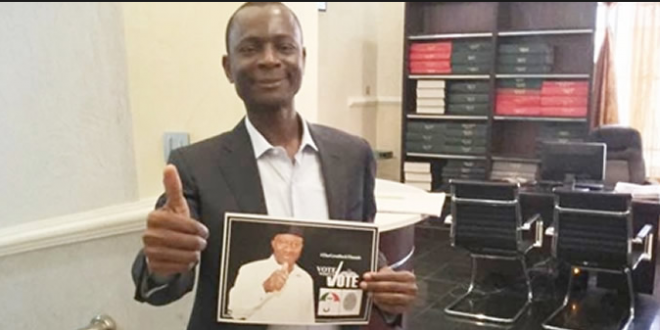 The cousin to former President Goodluck Jonathan, Azibaola Robert has revealed why his company, Oneplus was paid $40 million in 2013. Robert said the money was not for a contract but for him to use his expertise and knowledge of the Niger Delta region to halt oil flow disruption by militants.

He said this on the second day of the resumption of his defence in a case of money laundering brought against him and his company by the Economic and Financial Crimes Commission, EFCC.

Robert, who is a lawyer and environmental activist also revealed that he risked his life and traversed the vast Niger Delta creeks and interacted with the elements who were bombing oil facilities and disrupting oil flow in the area.

According to him, by this efforts the oil firms were able to increase production from less than 700,000 barrels per day to over 2.2 million barrels per day.

Robert said, “The $40m given to me by the government was used to execute a civil response to the illegal bunkering, pipeline vandalism, crude theft, etc in the Niger Delta.”

“The Oneplus Reserve Account was opened for the purpose of the assignment. For the purpose of accountability, we opened separate accounts for each project as foreign missions do. That’s why Kakatar has about 40 different accounts for various purposes such as salaries, taxes, projects, etc.

“It was in the course of executing this assignment that we incurred all the expenses we incurred and we have documents to back all of these,” he said.

He continued, “In September 2013, oil bunkering, pipeline vandalism, crude oil theft took over 10minutes of the Presidential media chat. As a result of the concerns by the federal government, Col. Sambo Dasuki soon replaced the late Gen. Azazi as the National Security Adviser.

“When Dasuki saw Azazi’s brief on the situation in the Niger Delta and oil production statistics, he invited me to discuss the issues of oil spill, pipelines vandalism, etc. Clearly, then, there was need for a civil response to oil bunkering in the Niger Delta.

“Then Dasuki got $1bn from the NNPC with the President’s approval. To the best of my knowledge two contracts were awarded to two different Israeli companies. They were to build a command and control in Abuja and they are doing it now.

“Next, the NSA asked me to write him a letter of undertaking that I will do what he had asked me to do. It was an assignment, not a contract. We did the assignment diligently and saved the country billions of Naira.

“We gave money to people in the creeks, those doing the illegal bunkering, militants in the creeks and we have record of the disbursement “ In 2016 the EFCC, without any invitation, invaded my home. I got the information and voluntarily went to their office to report myself.

“But they turned me back and asked me to return the next day and I did. They searched my house and office thrice and took away vital documents relating to the $40m assignment.

Having listened to his story, Justice Dimgba adjourned the case to the 4th, 5th, 6th and 7th of December 2018.