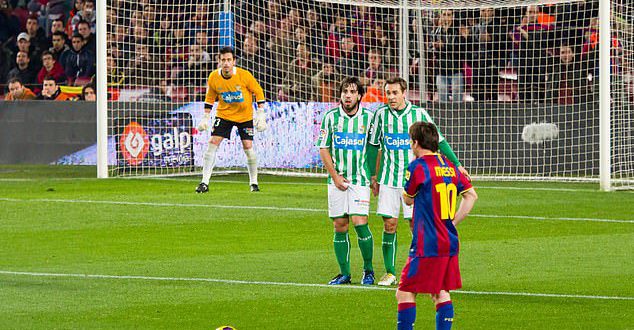 The ten-yard side-by-side barrier is in place to make it harder for the free kick taker to score a goal, but this technique has now been called into question by scientists

Goalkeepers are LESS likely to save a free kick if they have a ‘wall’ in front of them, scientists reveal

A goalkeeper is less likely to save a free kick if there is a wall of players in the way, according to new research.

The ten-yard side-by-side barrier is in place to make it harder for the free kick taker to score a goal, but this technique has now been called into question.

Researchers from Queen’s University Belfast found the wall gets in the way of the goalkeeper’s eyesight and slows their reaction time.

The goalkeeper’s sight is blocked for around 200 milliseconds and their reaction time is up to 90 milliseconds slower than when there is no wall.

As a result the researchers calculate that with a wall in place the ‘keeper is 13 per cent less likely to make a successful save.

And it applies to all types of free kicks ranging from the pile drivers of Gareth Bale or Cristiano Ronaldo to those who prefer to bend it – like David Beckham.

The results published in PLOS ONE are based on virtual reality experiments involving 25 participants in their 20s and 30s – ten of whom were skilled goalkeepers.

The phenomenon applied to both groups – including those who had only ever played in outfield positions.

Co-author Dr Joost Dessing explained: ‘While the defensive wall strategy is effective in some cases, the wall frequently obstructs the goalkeeper’s initial view of the moving ball.

‘Although the negative effects of this obstruction have been assumed by experts, they have not been scientifically quantified until now.

‘Our study shows when the view of the ball is initially obstructed, goalkeepers wait longer before starting to move, which leaves them less time to make that all important save.’

The study found the location of the free kick also plays a role, with free kicks taken from a central position posing the biggest threat to goalkeepers if they use a wall.

The laws of the game require all defenders to be at least 10 yards from the ball on a free kick. 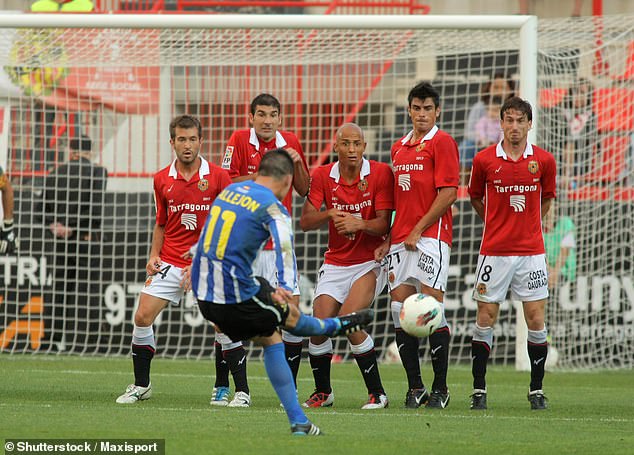 The idea of using a wall placed the minimum distance away is to reduce the amount of available goal at which the shooter can aim.

But critics claim obstructing the goalkeeper’s view in this way does more harm than good.

Professor Craig said: ‘As with many sports, goal keeping success is determined by the ability to get to the right place, at the right time to pull off a save.

‘Although goalkeepers might claim to ‘see’ the ball through the wall of players before it is kicked, they will most likely not see how that initial part of the ball trajectory unfolds just after it has been kicked.

‘It’s that important information the brain needs to make a decision about where the ball is going and when it will get there.’

Charles Igbinidu is a Public Relations practitioner in Lagos, Nigeria
@https://twitter.com/ionigeria
Previous Iran says it has resumed enriching uranium to 20% purity at its Fordo plant
Next UK judge rules against extraditing WikiLeaks founder Julian Assange to US