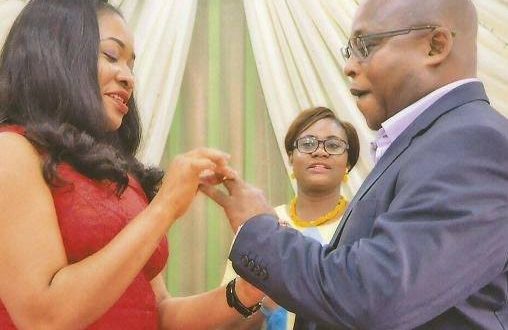 Onyinye Eze at the Yenagoa marriage registry in August

Mr Stephen Akpata. a Nigerian who used to live in Australia has been arrested by the police for allegedly strangling his new wife Onyinye Eze, Bayelsa Commissioner of Police Mr Asuquo Amba has said.

The 33 years old victim was an employee of Globacom Nigeria Limited.

Delta state born Akpata, popularly called Bishop, who claimed in a statement that he was 40 years old, allegedly on August 16, 2017 killed the woman in her Yenagoa residence. Police doubted Akpata’s age as he also claimed that he had spent 27 years in Australia, meaning that he went there when he was 13 years-old.

The Police Commissioner said Akpata murdered his wife by strangling her with the cable of an electric iron. He then also stabbed her with a knife.

The Police Chief said the incident became known when one of Onyinye’s colleagues, Moses Awo, reported at Ekeki Police Division in Yenagoa that Onyinye did not report for work as expected.

According to Amba, Awo had reportedly told the police that when he and another colleague went to Onyinye’s residence in Kpansia area of Yenagoa, they discovered that the apartment was locked. They also found that the television set in her room was working.

Some Policemen from Ekeki Police Division in Yenagoa went to the deceased’s apartment and forced her door open. They found Onyinye dead in a pool of her blood.

According to Bayelsa Police Commissioner Akpata was the prime suspect in the murder.

He was arrested by police in Badagry, Lagos State, after about two weeks on his trail.

Parading the suspect on Thursday at the state command’s headquarters, Amba, said that his operatives discovered that the deceased room was scattered.

Amba said the exhibits recovered at the scene of crime were a  knicker; a pair of canvas shoes, one damaged electric iron, one jean jacket, one pen knife, one pink  singlet, a Nokia mobile phone and a damaged wristwatch.

He said the exhibits were stained with blood.

The Police chief said the body of the victim was removed and deposited at the morgue of the Federal Medical Centre, Yenagoa, for autopsy.

Narrating how the suspect was arrested, Amba said that discreet investigations revealed that the suspect absconded to Ghana after allegedly committing the murder in Yenagoa.

The commissioner, who said the suspect returned to Badagry, Lagos a few days after, added that Akpata was tracked and arrested in Badagry on September 1 and brought to Bayelsa the same day.

”When our operatives went into the apartment of the deceased, we meticulously searched the environment and we saw a three-quarter knicker that was well hidden, tucked somewhere in the room that one would not suspect that something was hidden there.

”We discovered there was a blood stain on the knicker. By this time, we tried to find out who was with the lady because we knew that they had just contracted a registry marriage.

“We got in touch with Akpata who is the purported husband. He gave us the impression that he was out of town, implying that he travelled out of town before the incident.

”So, we were still communicating with him, at least to break the news to him that his purported wife was dead. He told us he was on his way back and this took us some days.

“As we were communicating with him, he was just giving us the impression that he was coming back, not knowing that he was plotting his own escape.

”We found out that prior to that time of her murder, the suspect had spent so much money on the lady and they were moving from one hotel to another.

”Still, we were playing along with him to enable him to come to us. But since he said he was in Lagos, we suspected that Ghana or Republic of Benin would be a likely point of escape.

“We got in touch with the embassies there and the Ghanaian Embassy was on the alert. From our radar, we found out that he slept in Ghana.

“He escaped back to Badagry in Lagos. He did not know we were still following him up. We got in touch with the police in Badagry. Eventually he was arrested at the Badagry border. So, we brought him back.” Amba said.

Amba added that the police command got vital information on him, particularly on his Facebook page where they saw many pictures of him with his murdered wife during their court marriage.

He assured that the suspect would be charged to court while the case would be diligently prosecuted as soon as investigations were concluded.