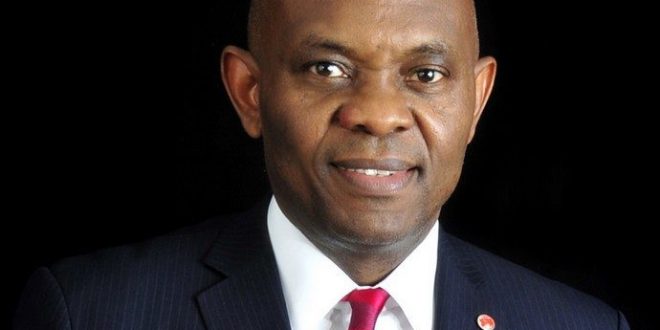 Give priority to Electricity, Elumelu pleads with Buhari

Chairman of Transnational Corporation of Nigeria (Transcorp) Plc, Mr. Tony Elumelu, has appealed to President Muhammadu Buhari to give priority attention to the electricity sector of the economy.

Speaking at the 2018 Annual General Meeting of the group, in Abuja, weekend, Elumelu said: “Let him help us with power,” arguing that constant power supply would drastically reduce the cost of doing business in the country and make economy more competitive.

With poor electricity supply across the nation, corporate organisations and individuals have had to spent huge sums of money on diesel and petrol to fuel their generators. Transcorp spent a whopping N1.292 billion as energy cost in the year under review, according to the company’s Annual Report and Financial Statements. Elumelu noted that the N701 billion Power Payment Assurance Plan, PAP, initiative of the Federal Government under the management of the Nigeria Bulk Electricity Trading, NBET, Plc greatly improved liquidity in the sector but noted that the problem of huge unpaid invoices of Power Generating Companies, GENCOs, persisted in the fiscal year.

This challenge, he said, must be addressed by the Federal Government to significantly impact the receivables of the GENCOS, gas suppliers and transporters in the sector.

The Trasncorp boss also urged President Buhari to make it possible for Nigerian investors to benefit from the nation’s assets.

“Let him encourage domestic investors to benefit from the assets of this nation,’’ Elumelu said.

The Federal Government had announced plans to sell some of the national assets, although details of that programme have not been made known.

Transcorp Power Ltd, operators of Transcorp Power’ s 972 megawatts gas-fired plant at Ugheli , Delta State, was described as one of the subsidiaries with great positive effects on the group’s performance in the year under review.

The chairman said the plant had consistently led power generation companies in the country in terms of electricity generated and wheeled unto the national grid.

According to Elumelu, “the company has remained the stabilizer among the power generating companies by provision of black start, free governor and a number of other ancillary services .

He said when the Bureau of Public Enterprises, BPE, carried out its capacity test, it confirmed the feat of 680MW achieved by Transcorp Power Plant, thereby qualifying it to be de-listed from companies that will continue to be subjected to post-privatisation monitoring by the bureau.

On the company’s inroad into the oil and gas sector, the chairman said its subsidiary, Transcorp Energy Limited, would continue its push towards the development of OPL 281 oil block and fulfilling work obligations under the Production Sharing Contract, PSC, entered into with Nigerian National Petroleum Corporation, NNPC.

He said: “This was further enhanced by NNPC’s extension of Phase I of the exploration period by two years.The extension has given us additional time to complete our work commitments under that phase and ultimately deliver on our work obligations under the PSC.”

According to Elumelu, those activities were critical to achieving the company’s objective of discovering hydrocarbons in commercial quantity and the resultant conversion of the Oil Prospecting Licence to an Oil Mining Lease, OML.

During the 2018 review year, the chairman said that the subsidiary also held significant engagements with Socoil Holdings Ltd which later transformed to Efora Oil, with the engagements ending in an understanding on the key issues that led to   litigation by both parties.

He told shareholders that the two parties entered into renegotiations for assignment of the 40 per cent participating interest in OPL 281 to Efora and the Joint Operation Agreement that would govern and advance the partnership for the development of the oil block.