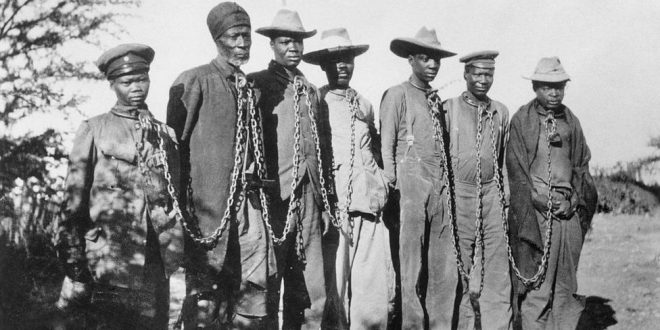 Germany has officially acknowledged that it committed genocide during its colonial-era occupation of Namibia, and announced a financial support gesture.

“In light of Germany’s historical and moral responsibility, we will ask Namibia and the descendants of the victims for forgiveness,” he said.

Mr. Maas added that Germany would, in a “gesture to recognise the immense suffering inflicted on the victims”, support the country’s development through a programme worth more than €1.1bn (£940m; $1.34bn).

The agreement will reportedly see funding paid over 30 years through spending on infrastructure, healthcare, and training programmes benefiting the impacted communities.

“We will now officially refer to these events as what they are from today’s perspective: genocide,” Mr. Maas said in Friday’s statement, adding that colonial-era actions should be discussed “without sparing or glossing over”.

A spokesman for the Namibian government told the AFP news agency that Germany’s recognition was “a first step in the right direction”.

But some traditional leaders have accused the government of selling out and refused to endorse the package offered.

What happened during the genocide?

Friday’s statement came after five years of negotiations with Namibia – which was under German occupation from 1884 to 1915.

The atrocities committed have been described by historians as “the forgotten genocide” of the early 20th Century, in what was then known as German Southwest Africa.

The UN defines genocide as a number of acts, including killing, committed with the intent to destroy, in whole or in part, a national, ethnic, racial, or religious group.

The genocide began in 1904 after a Herero and Nama rebellion over German seizures of their land and cattle. The head of the military administration there, Lothar von Trotha, called for the extermination of the population in response.

Survivors from the Herero and Nama population were forced into the desert and later placed in concentration camps where they were exploited for labour.

Many died of disease, exhaustion and starvation with some subject to sexual exploitation and medical experimentation. It is thought up to 80% of the indigenous populations died during the genocide – with a death toll in the tens of thousands.

Germany has previously acknowledged the atrocities but ruled out paying reparations. In 2018 they repatriated some human remains to Namibia which had been used as part of now-discredited research attempting to prove the racial superiority of white Europeans.

The latest deal was reportedly agreed upon during a round of negotiations held by special envoys in mid-May.

A declaration is expected to be signed by the German foreign minister in the Namibian capital, Windhoek, next month before being ratified by each country’s parliaments, German media reports say.

President Frank-Walter Steinmeier is then expected to travel to the country to officially apologise.

What has the reaction been?

Vekuii Rukoro, a Herero paramount chief who tried to sue Germany for compensation in US courts, said the deal is not enough to cover the “irreversible harm” suffered at the hands of colonial forces.

“We have a problem with that kind of an agreement, which we feel constitutes a complete sell-out on the part of the Namibian government,” he told Reuters.

Mr Maas said the negotiations had aimed to find “a common path to genuine reconciliation in memory of the victims” with members of the Herero and Nama communities closely involved in talks.

A number of traditional leaders who participated in the negotiations have so far refused to endorse the agreement, Namibian media report.

A particular point of contention is around language. The agreed deal focuses on the idea of reconciliation over formalised compensation, with Mr Maas describing the aid package as a “gesture” rather than reparation.

Jürgen Zimmerer, professor of global history of University of Hamburg, told the BBC World Service a great number of descendants of the victims of the genocide felt excluded.

“This is quite a problem if reconciliation is the aim,” he said. “How do you reconcile with the victims if the victims feel left out of the entire process?”

Tim Whewell, writing for the BBC earlier this year about the negotiations, said the discussions were the first of their kind by a former colonial power.

He wrote that many Herero and Nama living in overcrowded areas or informal settlements had hoped the deal would go some way to restoring land access and some of the prosperity their ancestors enjoyed before the genocide.