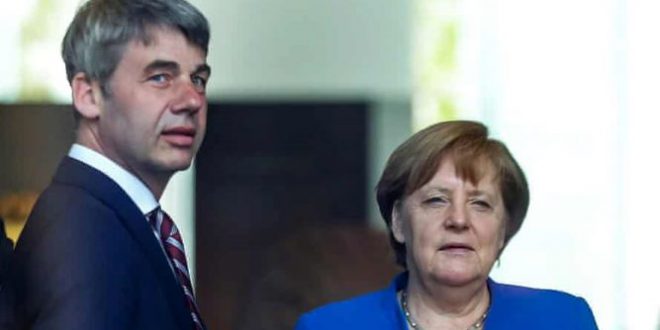 Angela Merkel with Jan Hecker, who has died at the age of 54, only two weeks after taking up the post of ambassador to China. Photograph: Hayoung Jeon/EPA

Angela Merkel ‘profoundly shaken’ by death of Jan Hecker, 54, one of her top foreign policy advisers

Germany’s ambassador to China, Jan Hecker, has died suddenly at the age of 54, less than two weeks into his Beijing posting.

Hecker was a former foreign policy adviser to the German chancellor, Angela Merkel.

“We are deeply saddened and shocked to learn of the sudden death of the German ambassador to China,” a statement on the embassy’s website said. “Our hearts are with his family and his friends and colleagues at this time.”

A cause of death has not been given. Hecker began his posting in Beijing on 24 August, having arrived earlier that month with his wife and three children, according to German media. Frank Rückert, Hecker’s deputy, would take over his duties for the time being, Deutsche Welle reported.

Hecker had worked with Merkel’s chancellery since 2015, coordinating refugee policy during the European migrant crisis until he was appointed head of the foreign, security and development policy department in 2017.

“I am profoundly shaken by Jan Hecker’s death,” Merkel said in a statement on Monday. “I mourn for a highly valued, longstanding adviser of deep humanity and outstanding expertise.

“I think with gratitude of our work together and am happy to have been so closely tied to him for years. My deepest sympathy goes out to his wife, his children and his other loved ones in their immeasurable grief.”

Hecker was one of Merkel’s top advisers on foreign policy, and his posting to Beijing was seen in Germany as a concerted effort to stabilise relations with China into the post-Merkel era.

Hecker had been an influential player in Merkel’s exclusive inner circle since 2015, when she tasked him with coordinating the country’s response to the refugee crisis. It was largely due to his competence as an organiser that Germany is now seen as having largely lived up to the chancellor’s promise of Wir schaffen das (“We will manage”).

In recent years, he was in charge of such sensitive diplomatic missions as the Franco-German-led negotiations between Russia and Ukraine over the conflict in eastern Ukraine. When the US president, Joe Biden, and Chancellor Merkel met for their first in-person bilateral talk at the Cornwall G7 summit this June, photos showed Hecker as one of the only other people at the table.

He had not risen into a position of such power through the conventional diplomatic route but with a background in law: between 2011 and 2015 Hecker was a judge at Germany’s federal administrative court.