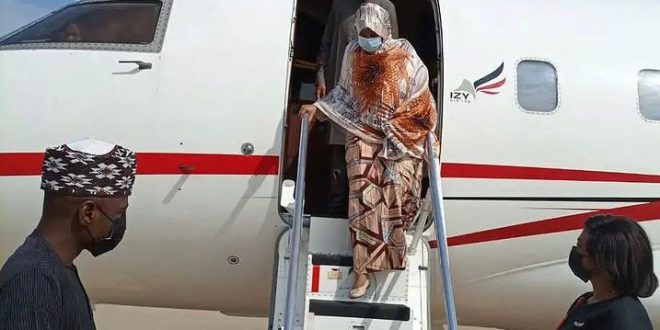 Prof. Hafsat Ganduje, the wife of Kano state governor, has returned to the state, after interrogation by the Economic and Financial Crimes Commission (EFCC).

She was invited for questioning over a petition written by her son.

In the petition, Abdulazeez had said he facilitated the acquisition of some plots of land in Kano but it was later discovered that the land had been paid for while his mother refused to honour the developer’s request for a refund.

The anti-graft agency had summoned Kano first lady but she was said to have refused to honour the invitation.

An official of the EFCC told Daily Trust that Ganduje’s wife was picked up following her rejection to honour the invitation extended to her.

After being grilled at the commission’s headquarters in Abuja, she flew back to Kano from Abuja in what looked like a private jet.

Dressed in native attire, the governor’s wife was accompanied by one of her aides.

The son was said to have fled abroad after filing the petition which was widely reported in the media.
Kano govt denies reports of the arrest
Meanwhile, the Kano state government has denied reports of the first lady’s arrest.

In a statement, the commissioner for information, Malam Muhammad Garba, said the reports of the arrest were unfounded.

He said the stories could not be attributed to any credible source.

“The Kano state government has dispelled as mere rumours being peddled by mischief makers that wife to the governor, Prof. Hafsat Ganduje has been arrested by the Economic and Financial Crimes Commission (EFCC).”

“The commissioner for information, Malam Muhammad Garba expressed regrets that the content of the unfounded story could not be attributed to any credible source such as the purported arresting agency, the EFCC.

“He pointed out that most, unfortunately, the fake story is being peddled on social media platforms without confirmation from either the government or the EFCC

“The commissioner called on the good people of Kano state to disregard  the rumour and also remain calm.”