Russia could use savage superweapons that vaporize bodies and crush internal organs if their assault of Ukraine becomes bogged down, Western officials warned tonight.

They fear Vladimir Putin could resort to high-power thermobaric weapons – dubbed the ‘father of all bombs’ – as brave Ukrainians resist his attempts to take control of Kyiv.

There are also concerns that units that are running behind schedule as they encounter stiff opposition could resort to indiscriminate shelling as a terror weapon.

Thermobaric weapons – also known as vacuum bombs – are high-powered explosive that use the atmosphere itself as part of the explosion. They  are among the most powerful non-nuclear weapons ever developed.

A thermobaric bomb dropped by the US on Taliban in Afghanistan in 2017 weighed 21,600 pounds and left a crater more than 300 meters (1,000 feet) wide after it exploded six feet above the ground.

Thermobaric weapons were developed by both the U.S. and the Soviet Union in the 1960s. In September 2007, Russia detonated the largest thermobaric weapon ever made, which created an explosion equivalent to 39.9 tons.

The U.S. version of the weapon reportedly costs over $16 million each.

‘My fear would be that if they don’t meet their timescale and objectives they would be indiscriminate in their use of violence,’ the official said. ‘They don’t adhere to the same principles of necessity and proportionality and rule of law that Western forces do.’

The bomb works by using oxygen from the surrounding air to generate a high-temperature explosion, making it far deadlier than a conventional weapon.

While Russian special forces have reached the suburbs of Kyiv, the bulk of Russia’s heavy armour is believed to be still more than 50km away from the capital.

Western officials have suggested Russia will kill Ukrainian President Volodymyr Zelensky and his ministers if they seize Kyiv.

Russia is launching a massive amphibious assault to bring thousands of navy personnel ashore in Ukraine on Friday, as Kyiv puts up a more aggressive defense than Moscow ever expected.

The assault is already underway in Ukraine, and Russian personnel sailed through the Sea of Azov, coming into west of Mariupol, a senior U.S. defence official said. The amphibious assault represents a significant ramping up of the conflict, as the Russian navy has until now played a largely supporting role in the fight.

Russian President Vladimir Putin has staged two amphibious attacks – the other is in Crimea and could land troop sin Odesa.

The U.S. has counted 200 Russian missile attacks so far. While most have been launched toward Ukrainian military installations, some have hit civilian areas.

The senior U.S. defence official said Friday that Russia appears to have lost some of its momentum due to the Ukrainian’s fiery resistance.

‘We do assess that there is greater resistance by the Ukrainians than the Russians expected,’ the official said, adding Ukraine’s command and control of its military ‘remains intact.’

‘They are not moving on Kyiv as fast as what we believe they anticipated they would be able to do. That said, they continue to try to move on Kyiv.’

The official also said several hundred Americans have left Ukraine over the past few hours.

Still, Putin has only mobilized about one-third of the troops he has stationed at the Ukraine border, the official said.

Few expect Ukraine to emerge victorious from what is almost certain to be a prolonged, bloody, and vicious war – but so far, Kyiv’s forces have managed to inflict heavy losses on Putin’s troops. 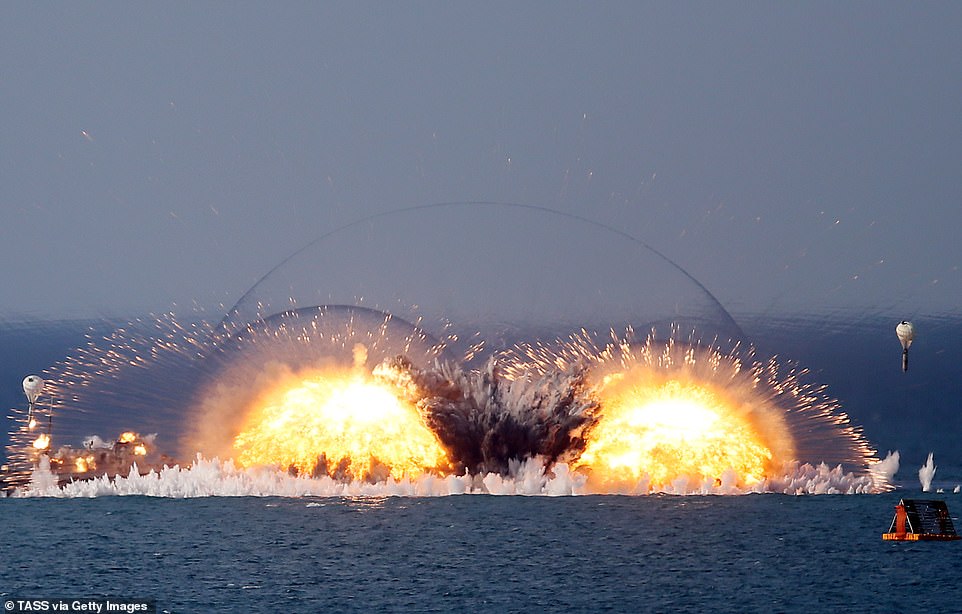 Defence Secretary Ben Wallace said today that Putin’s forces had failed to achieve many of their first day objectives. He said Russia had lost more than 450 personnel so far. Ukraine put the figure closer to 800. Neither number has been independently verified.

Western officials also suggested that Russia is avoiding many urban areas in order to avoid being bogged down in street fighting that could create heavy casualties and slow their advance.

Chief of Defence Intelligence Sir Jim Hockenhull said: ‘Russian forces continue to advance on two axis towards Kyiv. Their objective is to encircle the capital, to secure control of the population and change the regime.

‘Russia continues to conduct strikes across Ukraine. Overnight Russia launched a concerted series of strikes on targets in Kyiv. Multiple Rocket Launchers have been employed in Chernihiv and Kharkiv.

It came as Boris Johnson said the UK will ‘imminently’ level personal sanctions against Putin and his foreign minister Sergei Lavrov,.

The Prime Minister told Nato leaders in a virtual meeting tonight that the UK would echo measures announced by the EU to target the Russian leader.

Referring to Mr Putin’s wish to recover territory which previously fell under the USSR, he said Russia was ‘engaging in a revanchist mission to overturn post-Cold War order’.

Mr Johnson told allies ‘the UK would introduce sanctions against President Putin and foreign minister Sergei Lavrov imminently, on top of the sanctions package the UK announced yesterday’, according to a No 10 spokesman.

‘He warned the group that the Russian president’s ambitions might not stop there and that this was a Euro-Atlantic crisis with global consequences,’ he said.

Mr Johnson also used the meeting to urge ‘immediate action’ over the banning of Russia from the Swift payment system to ‘inflict maximum pain’ on the Kremlin.

Senior Ukrainian officials, considered to be on Putin’s ‘hit list’, have joined the exodus to Poland and are being airlifted to safety by joint British and American special forces, sources have suggested.

The source refused to name who was being rescued but added: ‘These are rescue missions.’

But he insisted that President Volodymyr Zelensky and his family were determined to stay with his people.

Ukraine shares a 332-mile-long border with Poland, and it takes around eight hours to drive from Kyiv to Lviv, a distance of around 335 miles.

Lviv is around 50 miles from the frontier with Poland and is expected to become a safe refuge for hundreds of thousands of Ukrainians fleeing the war.

This afternoon a brave Ukrainian citizen was been pictured standing up to Putin’s troops by trying to block a Russian military convoy – in scenes reminiscent of Tiananmen Square’s ‘tank man’ blocking Chinese forces in 1989. 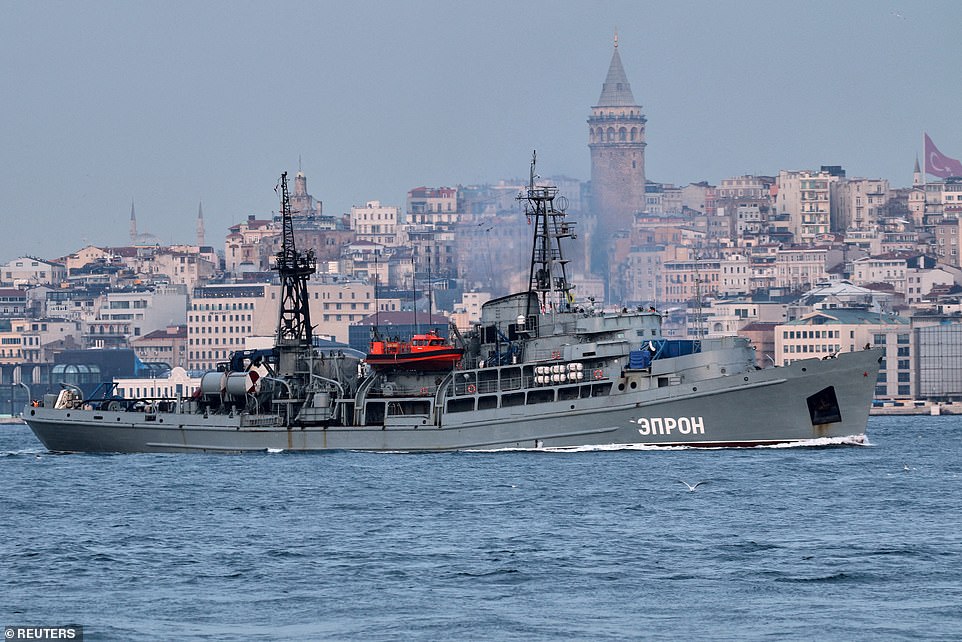 Russia is launching a massive amphibious assault to bring thousands of navy personnel ashore in Ukraine on Friday, as Kyiv puts up a more aggressive defense than Moscow ever expected

The footage, thought to have been filmed in the south of the country close to Crimea, emerged as Russia’s military bared down on Kyiv today in an apparent bid to seize the capital and ‘decapitate’ the government in the hopes of bringing a swift victory for Vladimir Putin.

But Putin’s men seemed set to face bloody street-to-street fighting as Ukrainian troops tasked with the city’s defence began setting up defensive positions across highways, on bridges and on street corners with gunfire and explosions heard in the centre of the capital. Civilians were also being armed with rifles and Molotov cocktails.

Russian forces were sustaining heavy casualties across the country with Ukraine claiming to have killed 2,800 men – as Putin himself made an appeal to Ukrainian forces to turn on their ‘drug-addicted neo-Nazi’ leaders or else lay down their arms and go home.

But there seemed little chance of that, as President Zelensky told his men ‘you are all we have’ as he gave a rousing address to defend the country, called on citizens to travel from elsewhere in Europe to join the battle, and hit out at the West for leaving him to face down the might of Russia ‘alone’.

Ukrainian troops were using armoured vehicles and snowploughs to defend Kyiv and limit movement, and said Russian spies were seeking to infiltrate the city. A truck was pictured riddled with bullets and bodies scattered around it, with Ukraine saying the men were Russian ‘saboteurs’ dressed in Ukrainian uniforms that it had killed.

Meanwhile Russia’s military said it had seized a strategic airport outside Kyiv in what would be a hammer blow to the defence. It is thought the plan is to use one of the city’s airports to fly in tens of thousands of reinforcements. Ukrainian forces did not mention an airport being captured, but Zelensky said fighting had restarted around Gostomel – a key airport where battles raged throughout the day on Thursday.

Russia claimed to have already cut the city off from the west – the direction most of those escaping the invasion are heading in – with lines of cars snaking towards the Polish border.

Intense fire broke out on a bridge across the Dnieper River dividing the eastern and western sides of Kyiv, with about 200 Ukrainian forces establishing defensive positions and taking shelter behind their armoured vehicles and later under the bridge.

The Russian troops are thought to have arrived from the north-west, having pushed down from Chernobyl which was captured late yesterday. More Russian troops and armour are advancing on the capital from Konotop, in the east, having bypassed the city of Chernihiv where they ran into heavy Ukrainian resistance.

Anton Herashchenko, an adviser to Ukraine’s interior minister, said today will be the war’s ‘hardest day’.

Once Kyiv is surrounded, US intelligence believes the plan will be for Russian special forces to move in and seize an airport – likely Sikorsky or Boryspil – which would then be used to fly in a much larger force of up to 10,000 paratroopers who would assault the capital.

The job of the paratroopers would be to enter the city, find Zelensky, his ministers, and parliamentarians, before forcing them to sign a peace deal handing control of the country back to Russia or a Moscow-backed puppet regime – effectively ending the war without Putin’s ground forces needing to complete the difficult and bloody task of seizing and occupying the whole country.

It appears the Russians almost pulled off the plan on the first day of the invasion when 20 attack helicopters landed a crack team of troops at Antonov Airport, 15 miles to the north of Kyiv. But Ukrainian national guard units managed to retake the landing strip overnight after heavy fighting, scattering the surviving Russian attackers into the surrounding countryside.

A Russian attack on the capital would likely be coordinated with a push by troops on southern and eastern fronts – Crimea and Donbass – aimed at pinning down Ukrainian armed forces so they cannot retreat and reinforce the city, officials told author Michael Weiss.

It may also be accompanied by bombing raids and sabotage attacks on power grids and infrastructure to sow panic and force people to flee, snarling up roads and making it difficult for forces already in Kyiv to move around.

Zelensky pleaded with Moscow to hold talks, and with western powers to act faster to cut off Russia’s economy and provide military help.

‘When bombs fall on Kyiv, it happens in Europe, not just in Ukraine,’ he said. ‘When missiles kill our people, they kill all Europeans.’ His whereabouts were kept secret.

He also offered to negotiate on one of Mr Putin’s key demands: that Ukraine declare itself neutral and abandon its ambition of joining Nato.

The Russian president’s spokesman said the Kremlin could consider the idea, but foreign minister Sergey Lavrov suggested it may be too late, saying Mr Zelensky had ‘missed the opportunity’ to discuss a non-aligned status for Ukraine when Mr Putin previously proposed it. 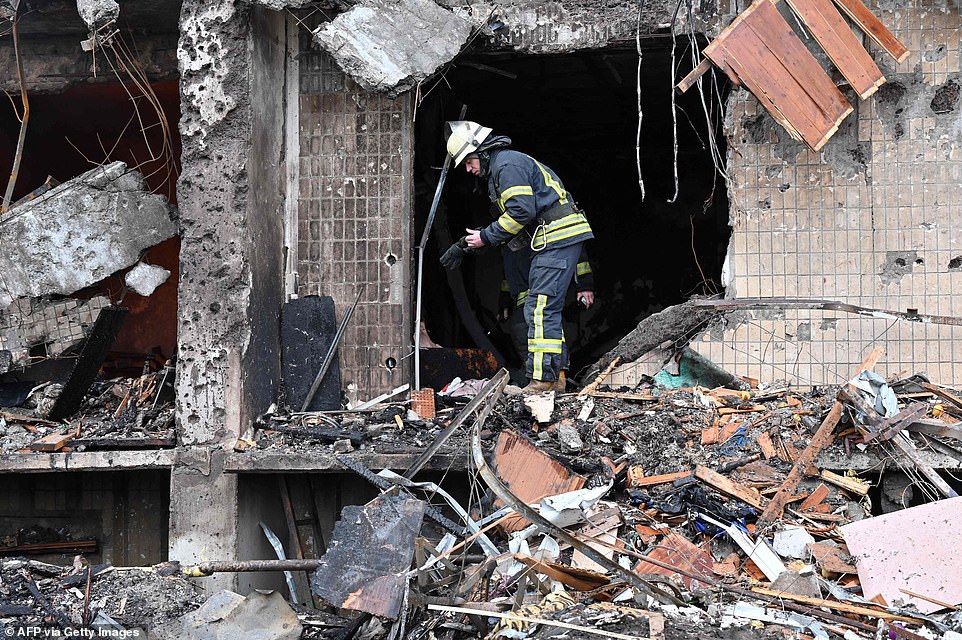 Firemen pick their way through the rubble of a destroyed apartment in Kyiv, as President Zelensky said the Russian military is now targeting civilian areas
Share