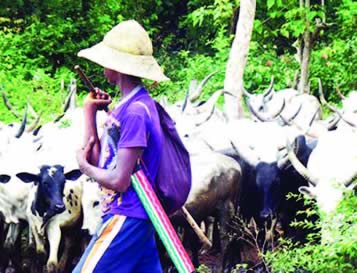 A Fulani herder , Muhammed Haruna , has allegedly died from injuries he sustained after being stoned by a female farmer in Delta State.

It was gathered that the herder and his colleague drove their cattle into the yet – to – be indentified woman’ s farm in the Upper Agbarho area of Ughelli.

It was gathered that the woman and the herders were engaged in a stone – throwing match after a heated argument .

It was gathered that the 15-year – old Muhammed was hit by one of the stones and immediately collapsed on the scene of the confrontation before he was rushed to a private hospital where he was pronounced dead by doctors .

Security sources said that the incident had led to tension in the area as security operatives launched a manhunt for the fleeing owner of the farm .

One of the sources in the area said , “ When the owner of the farm , a lady , accosted the herdsmen while they grazed on her farm with their herds , a verbal confrontation ensued .

“ This led to the throwing of stones at the herdsmen by the locals in the area , including the woman. The herdsmen attempted fleeing , but one of them was hit and he collapsed . ”

The state Police Public Relations Officer , Andrew Aniamaka , confirmed the incident when contacted , saying that the lady in connection with the incident had absconded .

Aniamaka added that the matter was being investigated by the state command , adding that anyone found guilty would be punished in line with the law.

Meanwhile , unknown persons in Ughelli have allegedly attacked a suspected herdsman for reportedly raping two women on their farms , resulting in the accused being stabbed in his mouth.

The incident, it was learnt , happened last Saturday after some natives of the area pursued two of the unidentified herdsmen into the interior areas of the community where they attacked and injured them.