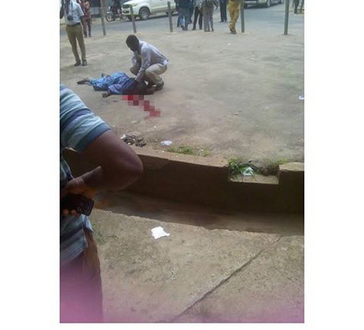 The University College Hospital, Ibadan, was on Wednesday thrown into confusion, after a middle age man apparently committed suicide by jumping from the fifth floor of the hospital building.

The head of public relations of the hospital, Ayodeji Bobade, told reporters that the victim allegedly sneaked to the upper floor, following the ongoing nationwide strike embarked upon by health workers, and used the opportunity to kill himself.

He said the incident occurred at about 9 a.m., adding that the victim smashed his head on the concrete floor, and died on the spot.

The family could not be reached as at the time of filing this report, he said.

The man, who was said to be in his 50s, reportedly removed his pairs of leather slippers and put same on the fifth floor before he took the plunge.

Unconfirmed reports said the deceased, who wore ankara clothing, left a note behind in which he allegedly said he committed the suicide because he was duped of N30 million.

The note is said to be with the police.

Newsmen who visited the scene saw bloodstains on the ground, while the hospital staff were seen cleaning the scene.

The body of the victim was moved to the morgue of the hospital.

Mr Bobade said the management of the hospital had informed the police, and that the only item recovered from the victim was a pair of his slippers, as there was no any identity on him.

Previous Tragedy: Six Wedding Guests Electrocuted To Death In Freak Accident
Next My Wife Is Cheating, She Tried To Poison Me – Man Tells Court