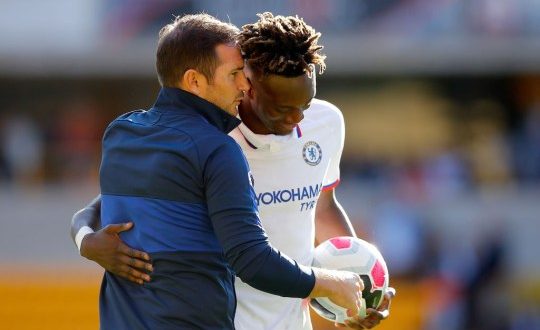 Frank Lampard has told Chelsea duo Tammy Abraham and Fikayo Tomori they must raise their game even more and not rest on their laurels after earning call-ups to the England team.

The two academy graduates have enjoyed excellent seasons so far for the Blues, earning recognition from Gareth Southgate in the latest England squad for October’s internationals.

While Lampard is thrilled to see the pair – and Mason Mount, who was in the previous England squad – making the mark for their country, he does not want them to lose focus on their Chelsea form.

Asked what he’d said to Abraham and Tomori after making the squad, Lampard explained at his pre-match press conference on Friday:

‘I spoke to them before, I was aware of the call-up coming.

‘They’ve got big smiles on their faces today, the three of them – plus Ross [Barkley], Ross has been there obviously a while.

‘But they’re very smiley and happy and I might have to remind them, come Sunday, they need to perform for us. Because it’s great news for them, it’s great news, but as I keep saying, it’s just the start.

‘And the moment any complacency creeps in, or standards drop, they’ll all suffer, so I’m pleased that they’re smiling.

‘But they need to take this now as something to add to their armoury and go,

“Okay, I’m an England player now, I’m in the England squad, so I need to show even more day in and day out, game in and game out, for us”.

On Abraham, he added: ‘I want to see him continue playing in the same vein for Chelsea, continue scoring those goals. And then when he goes to England I think he naturally has the attributes to go there and be successful, but it will be another step for him.

‘There’s competition there. When he steps into the squad, he’ll see that there are great strikers around him there already, so it’s a good challenge for Tammy.’