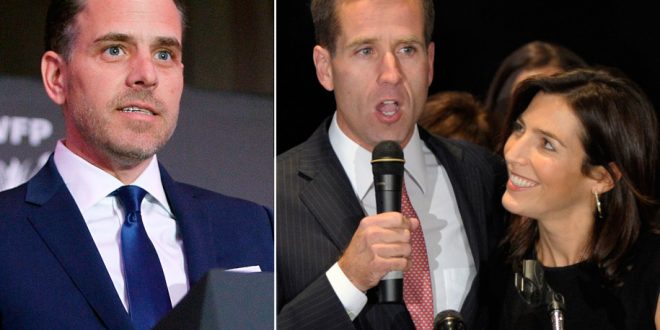 The widow of Beau Biden, the son of former Vice President Joe Biden, has started a romantic relationship with another Biden brother, it was reported Wednesday.

Beau’s widow, Hallie Biden, was devastated by his death in 2015 — but has found comfort in the arms of her brother-in-law, Hunter Biden, who has separated from his wife, Kathleen, a CBS News affiliate in Philadelphia reported.

Hunter, 47, a lawyer, and his estranged wife have three daughters together.

The astonishing family drama caps a difficult period for the Bidens following the death of Beau at age 46. The former vice president cited the death of his elder son as one of the reasons he decided in October 2015 against running for president.

Former Vice President Biden confirmed the relationship to Page Six and said that he and his wife, Dr. Jill Biden, have given their blessing to the couple.

“We are all lucky that Hunter and Hallie found each other as they were putting their lives together again after such sadness. They have mine and Jill’s full and complete support and we are happy for them.”

Hunter, a lawyer who has three daughters — called Naomi, Finnegan and Maisy — with estranged wife Kathleen, also told Page Six, “Hallie and I are incredibly lucky to have found the love and support we have for each other in such a difficult time, and that’s been obvious to the people who love us most. We’ve been so lucky to have family and friends who have supported us every step of the way.”

Hunter and Kathleen Biden separated in October 2015, five months after Beau’s death and around the time that Joe Biden decided not to make a presidential run. It is not clear if the estranged couple has yet filed for divorce.