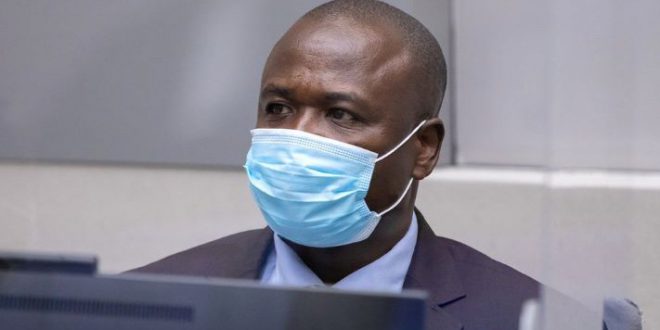 A former Ugandan child soldier who became a commander in a notorious rebel group has been jailed for war crimes.

Dominic Ongwen, now 45, was sentenced to 25 years in prison for crimes including murder, rape, and torture.

He is the first former Ugandan child soldier to be convicted and sentenced by the International Criminal Court.

Ongwen was abducted by the Lord’s Resistance Army (LRA) rebel group when he was nine years old and eventually became a feared commander.

He was convicted by the International Criminal Court (ICC) in February on 61 of 70 counts of crimes against humanity and war crimes.

The crimes relate to attacks on four camps for internally displaced people in Uganda in 2004. More than 4,000 victims provided testimony in the case, which was heard in The Hague.

Ongwen was found guilty of sexual slavery, forced marriage and the rape of seven women who were abducted and placed into his household. These charges were in addition to murder, attempted murder and torture.

Despite the gravity of the crimes, judges sentencing Ongwen on Thursday said they decided not to give the maximum life sentence because he was abducted as a child on his way to school in the late 1980s and groomed by rebels who had killed his parents.

But they found he had knowingly committed serious crimes as an adult during the LRA’s two-decade reign of terror in the 2000s.

The judges added that they hoped to give him the opportunity to rehabilitate. His conviction means that victims can now start the process of seeking reparations.

At the height of his time with the LRA, Ongwen – known as White Ant because his surname means “born at the time of the white ant” – was the commander of the Sinia brigade and one of the most feared fighters in the rebel movement.

He turned himself in to US forces in the Central African Republic (CAR) in 2015 – and they later handed him over to the Ugandan army.

The LRA was formed more than 30 years ago, operating in Uganda and neighbouring countries.

Led by Joseph Kony, it became notorious for abducting thousands of children to use as soldiers or sex slaves, and for mutilating civilians.

In 2005, the LRA was forced out of Uganda by the army and the rebels went into what is now South Sudan. They eventually set-up camp in the border area with the Democratic Republic of Congo.

They later moved to CAR where they acted more like a criminal outfit engaging in poaching and illegal mining.

Arrest warrants for Joseph Kony and other top commanders of the movement remain outstanding.