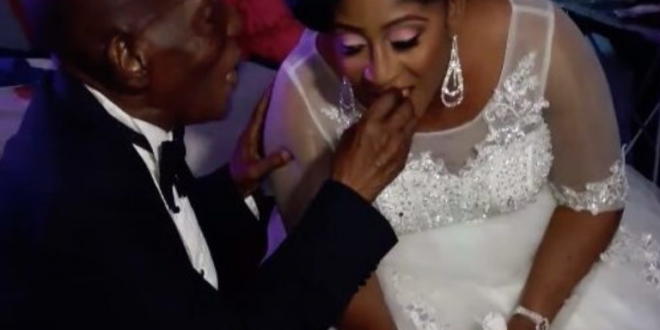 A senator of the second republic and prominent lawyer, Sen. Cyrus Nunyieh, who got married eleven months ago, has died.

The 88-year-old lawmaker until his death was the first and oldest lawyer of Ogoni extraction.

The president President of Bori State Movement, made headlines after getting married to his younger heartthrob, Miss Ijeoma (said to be in her 40’s) in Port-Harcourt, Rivers state capital in October 2017.

Cyrus Nunieh, said he decided to marry another wife because he was alone and needed a companion after his wife’s death in 1991.

Nunieh pointed out that his children were all adults, who had ventured into various business of their own, adding that he could no longer cope with loneliness.

He described his new wife, Rosemary, as an intelligent woman, who would always be there for him and share ideas with him.

His death was announced this morning by the Ogoni Youth Forum.

Read the press statement below;

The national executive council of Ogoni Youth federation (OYF), received with rude shock the sad news of the demise of her Patron, Sen. Cyrus Nunieh, a senator of the second republic and renowned legal icon who has gone to be with his creator

We express our sympathy to the bereaved family, Ogoni ethnic nationality and Rivers state . We pray that almighty God will grant the soul of the departed eternal repose and comfort those in pain

Accept our heartfelt condolences in this time of grief